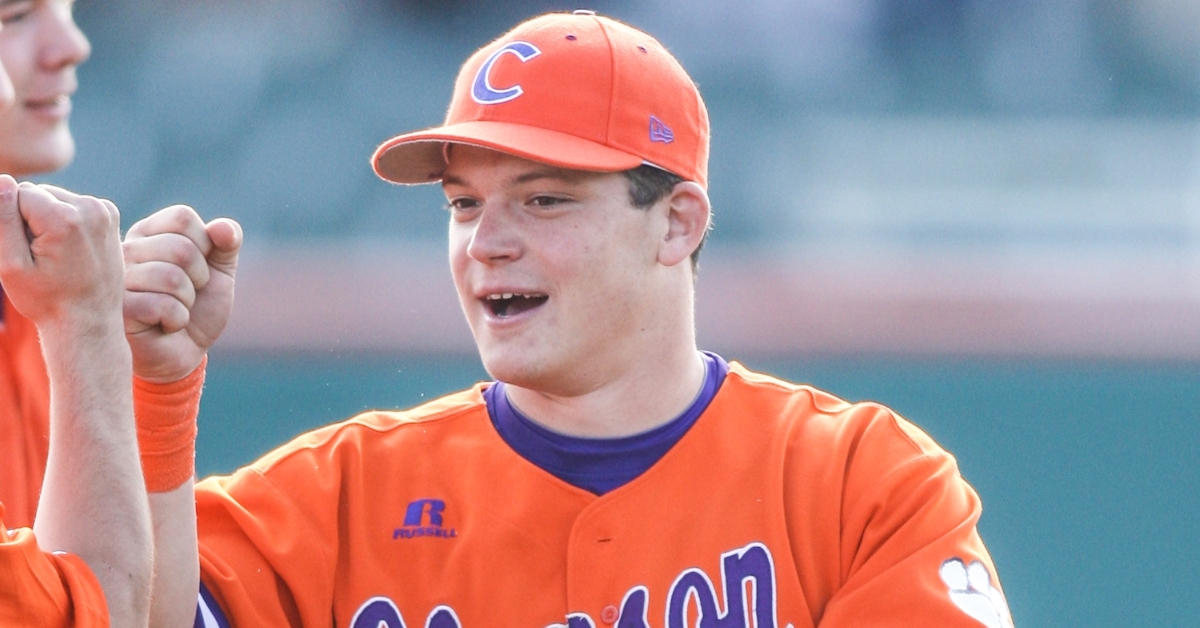 Phil Pohl is back with the Clemson program after a successful run as a player from 2009-12 (Clemson athletics photo).

CLEMSON, S.C. – Head Coach Erik Bakich announced the Clemson Baseball support staff on Thursday. Phil Pohl joined the staff as director of scouting & player personnel, while Brad Owens, who has the additional role of chief of staff along with his director of operations duties, joined Ben Paulsen (director of player development) as staff members who were retained.

“We are thrilled to finalize our baseball staff with three men who all have a deep connection to Clemson University and Clemson Baseball,” said Bakich.

“Retaining Brad Owens and Ben Paulsen was a very easy decision. Brad has served the baseball program for over 15 years, and his loyalty and administrative leadership are gold standards in college athletics. Everyone who knows Brad knows he is a man of the highest character.

“Ben is a great role model and success story for our players. His work ethic enabled him to become a star player at Clemson and ascend to the major leagues for three seasons. His knowledge of technology and data is also a great resource for our players, staff and team.

“Phil Pohl returning to Clemson is another tremendous resource for our players. His experience and pedigree is unmatched having played in the College World Series, along with his rapid ascension through the coaching and managerial ranks with the Oakland Athletics.

“We couldn’t be more excited to have Brad, Ben, Phil and their young families continue to be a part of the Clemson Family.”

Pohl lettered four times (2009-12) as a Tiger as one of the most respected players in the program for his hard work and dedication on the field and in the classroom. The two-time co-captain and two-time winner of the Tiger Baseball Award, given to the team’s best leader, was a career .286 hitter with a .363 on-base percentage in 198 games (157 starts). He also totaled 15 homers, 44 doubles, 113 RBIs and 94 runs in his career and was a two-time All-ACC selection.

Off the field, the Cooperstown, N.Y. native was a two-time Academic All-American, two-time All-ACC Academic selection and four-time ACC Academic Honor Roll member. He graduated from Clemson in 2012 with a degree in management with a 3.63 career GPA and 3.0 GPA or better in all eight semesters at Clemson.

Pohl, who was drafted in the 28th round by the Athletics in 2012, played four years (2012-15) in the minor leagues in their organization, reaching as high as AAA in 2014. In 2016, Pohl became Oakland’s bullpen catcher and served in that role for six seasons. Prior to the 2022 season, Pohl was named manager of the Lansing Lugnuts, the High-A affiliate of the Athletics, meaning he spent 11 seasons in the Oakland organization.

Owens is in his 16th season with the Tiger program, serving as chief of staff, operations. He is in charge of all team travel and camps for the program along with handling many other administrative duties.

The native of Barnwell, S.C. attended nearby Anderson (S.C.) University, where he was a four-time letterman. The righthanded middle reliever lettered from 2003-06 and served as team captain during his senior season. In his four-year career, he made 52 appearances (one start) on the mound and pitched 73.0 innings.

Owens, who had a 3.30 GPA in his career as an undergraduate, received a degree in business management from Anderson in 2006. He later earned his master’s degree from Clemson in human resource development in 2008.

Paulsen is in his fifth year with the Tiger program serving as director of player development. Paulsen spent the 2018 season as a student assistant coach at Clemson, as he returned to Tigertown to finish his degree requirements through the Tiger Trust program.

Paulsen, a native of Acworth, Ga., graduated from Clemson with a degree in business management in 2018.