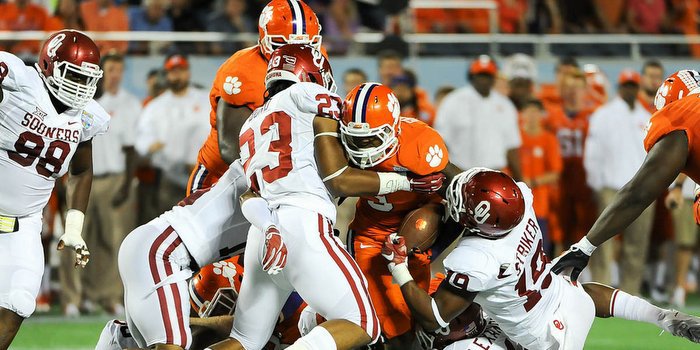 The best way to predict future performance for Clemson football is their past performance. Clemson generally does not beat good teams on the road often, we hardly ever beat FSU in Tallahassee, we haven't beaten Georgia Tech in Atlanta in forever, and we struggle with away football games. For example, we struggled with Syracuse, N.C. State and S. Carolina last year. Based on all of this, I don't understand the overconfidence that I hear from Clemson fans this year, especially with the opener at Auburn. Auburn will not be terrible this year. Our Tigers better bring their A game. We have a lot to lose in this game. It will feed the SEC arrogance and how much better any SEC team is than the elite ACC teams. The Auburn game is huge! I hope that our players and coaches aren't listening to everyone telling them how good that they are.

Clemson will face a top ten team on the road in Tallahassee, but the Tigers are double digit favorites over GT, BC, and WF.

Auburn is only 11-11 overall in their last 22 games. Their wins have come against Ole Miss, Samford, Louisville, Jacksonville State, San Jose State, Kentucky, Texas A&M and Memphis. Their program has no identity. They are 2-9 in their 11 SEC games. They have huge question marks at QB, RB, WR, and OL but other than that the offense should be good.

They will be desperate in the opener, and it is a chance for Gus Malzahn to jump start his career and save his job. Jordan-Hare will be electric early, but Clemson is the superior team. This will be a double digit win.

I was a freshman in 1981, and I remember all the talk about this elite freshman noseguard named William Perry. He was definitely everything as advertised and more. Is Dexter Lawrence of this same mold?

Lawrence is similar to Perry in that they are both freaks of nature. However, Perry's competition was 35 years ago, and bodies are just bigger now. Perry was a rare 300-pounder and was about 6-1. Lawrence is 6-5 and 342 but moves like a 280-pounder. I also think Lawrence has a chance to be a higher draft pick in the NFL. I have heard coaches talk about him developing into a top ten pick in three years.

What is your take on the ACC "acquiring" Hall of Fame Players from new member schools? For instance, adding Doug Flutie to the ACC Hall of Fame when he never played under the ACC banner. Or Dan Marino for Pitt? Or even worse, Joe Montana from Notre Dame - not even a current ACC member in football? It seems odd to me that the ACC would do that. Wouldn't it be better to recognize these athletes in a separate way from those like "the Fridge" or Charlie Ward that were a household names in ACC stadiums?

I have noticed that too. It doesn't make much sense, but the alternative is to not recognize any player from Pitt, Syracuse or BC. I think they are stuck, but most of us realize those players didn't play in the ACC.