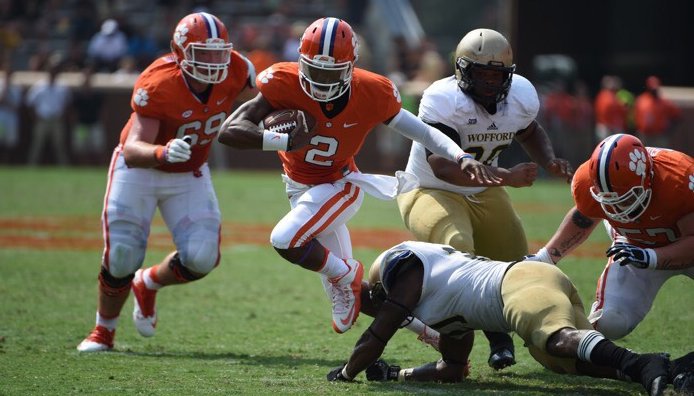 The season opener couldn't have gone much better Saturday. The Tigers came out and dominated Wofford from the opening kick. Perhaps the best news was the number of players that played and impressed Saturday.

The only negatives I saw were Mike Williams

Nick Schuessler
RS Jr. Quarterback
#12 6-3, 202
Grayson, GA
View Full Profile turned the ball over and looked more of the same we saw early in camp. Meanwhile, I am ready to see more of Kelly Bryant

Kelly Bryant
Fr. Quarterback
#2 6-4, 213
Calhoun Falls, SC
View Full Profile as the backup. The freshman is a dynamic playmaker who is the most talented player between the two.

Offensively, the list of players who impressed is long. Deshaun Watson

Deshaun Watson
So. Quarterback
#4 6-2, 207
Gainesville, GA
View Full Profile looked like Deshaun Watson. He was on point with his play and his decision making. What we saw agin was one of the nation's top players.

Wayne Gallman
RS So. Running Back
#9 6-1, 210
Loganville, GA
View Full Profile is the best of the bunch, but all five showed signs that they could be the guy if needed.

This is a deep, talented group of wide outs. Like many, I sometimes forget just how good Artavis Scott

Artavis Scott
So. Wide Receiver
#3 5-10, 191
Oldsmar, FL
View Full Profile is. He has great speed and explosiveness, plus he is very strong.

Ray Ray McCloud had a spectacular debut. He looked extremely comfortable and is another difference maker.

Deon Cain
Fr. Wide Receiver
#8 6-1, 197
Tampa, FL
View Full Profile saw his first action, and it was mostly positive. His role should continue to grow now that Williams is out for an extended time.

The offensive line was excellent. I watched the replay yesterday was amazed at the play of the offensive front. They played ten linemen in the first half, and I saw a lot of great things. Mitch Hyatt

Perhaps the most impressive unit is the deep and talented defensive line. Scott Pagano

Shaq Lawson
Jr. Defensive End
#90 6-3, 272
Central, SC
View Full Profile has taken his game to another level. The junior defensive end showed a motor like we haven't seen from him. I thought the young defensive ends looked very athletic.

Linebackers were aggressive but looked like they were very disciplined against the option attack.

The biggest worry coming into the game was the kicking game, but I thought it was very good. Snaps, holds, kicks, returns and coverage were all very good. The only negative in the kicking game were the two fumbled punts on the rugby kicks.

Other than the Williams injury, the opener could not have gone any better. This is a deep and talented football team and the number of players that played and impressed Saturday was very encouraging. Yes, it was only Wofford, but Saturday showed everything we wanted to see.