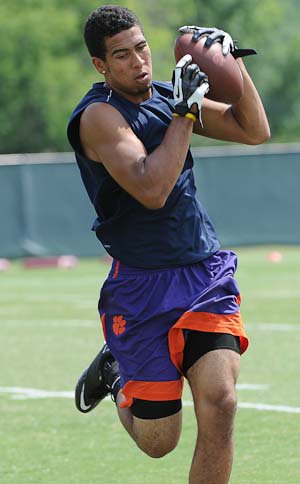 Which Freshmen Will Play?

When Clemson opens its fall camp one of the items we will be watching most closely is how the true freshman are fitting in.

Inevitably the question that would be asked as much as any is which freshman will be able to contribute this season?

While it is way too soon for even the staff to know for sure, let's take a look at who COULD have a chance to play.

I've always thought that two things have to happen for a true freshman to play. First, he has to have the talent and maturity, both physically and mentally. Second, there has to be the opportunity in the depth chart.

So here's a look position by position:

Obviously no quarterbacks will play because the Tigers did not sign a quarterback last season.

At running back there is the opportunity as Clemson loses Andre Ellington. Wayne Gallman and Tyshon Dye will get a long look in camp. A lot will depend on how they play without the ball in their hands. One of the biggest areas where freshmen backs often lack is pass protection and this staff will not let Tajh Boyd sit back there with a back that can't protect him. Rod McDowell, DJ Howard and Zach Brooks have more experience, but Gallman and Dye are going to get a look.

The Tigers have been lucky at wide receiver with some great performances in recent years, but this year they have only five returning scholarship wide receivers. So Kyrin Priester and Mike Williams definitely have an opportunity to come in and play early. My guess is one plays and one red shirts.

At tight end the situation changed in spring when Sam Cooper went down with a torn ACL. Staton Sekinger and JJ McCullough have the inside track but because of his performance in the spring, I would be very surprised if Jordan Leggett is not a big contributor this season.

On the offensive line Clemson returns 16 players from last season, so it will be tough to come in as a true freshman. This is also a difficult position for a true freshman to come in and play. Many freshmen often have to change their bodies and because of that combined with the fact the Clemson has so many returners, I would be surprised if Tyrone Crowder and Maverick Morris avoid a redshirt season this year.

At defensive end there is a chance for one or two of the true freshman to play. Shaq Lawson and Ebo Ogundeko went through the spring and have an inside track on Dane Rogers. I think we can see at least one defensive end playing this fall.

Defensive tackle is another story. Clemson has seven returners at defensive tackle, so it will be hard for Scott Pagano to avoid a redshirt season.

The Tigers have seven scholarship returning linebackers but Dorian O' Daniel and Ben Boulware have a chance to play this year. Linebackers often contribute on special teams and I would not be surprised if one or both O'Daniel and Boulware have that opportunity this season.

The staff thinks the biggest issue on defense is the secondary. Clemson does return three guys from injury in Martin Jenkins, Darius Robinson, and Bashaud Breland but eight new defensive backs will have an opportunity to play. The Staff feels as many as four can avoid a red shirt. Coming out of high school, my guess is that Mackenzie Alexander has the ability and mentality. Jayron Kearse has the frame. Adrian Baker has the speed. Korrin Wiggins is a bright player and could pick things up early. Marcus Edmonds has good cover skills and Jadar Johnson has an inside track because he is a smart player that went through spring practice.