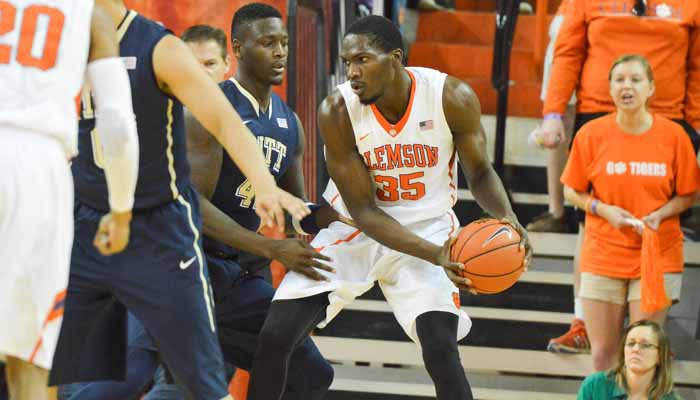 Last weekend we saw Clemson's basketball team dominate Virginia Tech and the baseball team drop two of three games at home to West Virginia. Basketball was the high point, while baseball was disappointing.

This weekend it was the exact opposite. It was basketball with the disappointing outcome at Duke, while the baseball team swept Maine in Augusta, GA.

The Tigers got dominated at Cameron Indoor Stadium 78-56. There were few bright spots in the expected loss.

Coach K had his team ready to play and the Blue Devils played harder than the Tigers. Duke was without Okafor, a national player of the year candidate, but the other players stepped up. Duke shot 51.7% from the field and outscored Clemson from three 21-12. Clemson was just 4-18 from three. The Blue Devils outrebounded Clemson 38-29.

Jaron Blossomgame
RS So. Forward
#5 6-7, 215
Alpharetta, GA
View Full Profile was the only Tiger in double figures with 10 points.

The lone bright spot for Clemson was freshman Gabe DeVoe

Duke pressured the Tigers into 14 turnovers and then played zone defense for 40 minutes. I was not impressed with Duke's zone which gave up many open looks. Unfortunately, Clemson could not take advantage of the open looks.

Koerner went eight innings scattering eight hits and two runs. Koerner did allow a walk in recording his first win of the season.

Erwin went 7.2 innings without allowing an earned run. He gave up five hits and no walks with five srikeouts.

Crownover went seven innings and allowed only five hits and one unearned run. He also didn't walk a batter and had seven strikeouts.

The Tigers' offense was just as impressive. The Tigers hit .322 for the series including Eli White going 7-14 and Andrew Cox going 5-12.

In Friday's 10-1 win Clemson had 14 hits including three from White and Reed Rohlman. The duo also combined for five RBIs.

In the first game of the double header, Clemson won 5-4 on Steven Duggar's game winning single. White also had three hits in the contest.

This week Clemson gets Wofford at home on Tuesday before the huge three-game series with arch-rival South Carolina this weekend.

In the series finale Clemson had 10 runs and 13 hits. The Tigers were led by freshman Chase Pinder who had three hits. Cox, Chris Oakey and Tyler Slaton had two hits apiece.