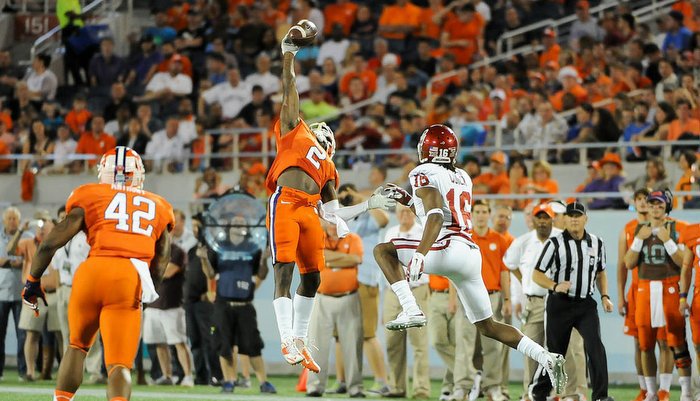 Each Friday I publish your comments and answer your questions, but we will take Christmas and Christmas Eve off so we moved this blog to today. To submit a comment or questions, please email me at mickeyplyler@hotmail.com.

I think the difference in Orange Bowl will be our defense. The offense will do its thing, but if the defense is healthy, and I mean healthy, then I like our chances. Boulware and Lawson playing without arm braces says they are truly ready to go. The key to this game is being able to contain Mayfield. We have to hit him early and make him one dimensional. If he has options and is comfortable, I think it could be a long night for the Tigers. A healthy Boulware and Lawson go a long way to making him uncomfortable.

Merry Christmas to you and your family.

Merry Christmas! I agree about the defense. I don't see Oklahoma shutting Clemson down, but I can see Clemson's defense playing well and limiting the Sooners. Oklahoma is balanced and has four great skill players in Mayfield, Perrine, Mixon and Shepard. But I think Clemson's defense gets back on track and comes up with enough stops to win the Orange Bowl.

I read your blog about basketball. You should write more because that is what is needed to get more people interested in Clemson basketball.

You were good to not call out fans as many of us were not in attendance. So again, how much love is there really for Clemson basketball?

People will state recruiting and coaches and style of play for their various reasons of not going, disinterest or frustrations, etc. But in reality, Clemson has not given and never given consistent commitment to its basketball program. It is 3rd or 4th fiddle in most people’s minds. We will see what happens as Littlejohn is improved.

My main point in writing is due to your sentence “I don’t expect to compete in the ACC on a yearly basis, but I do expect to beat South Carolina.” I want to ask “Why?”

Of course we always want to beat our rival, but beyond that… what makes you think that Clemson should beat USC in basketball every year?

USC probably has provided more interest and attention and support to its basketball program than Clemson has. Clemson has often won with less talent. But USC is good this year. They play tough and have big guards who can set the tone. They have talented players and the talent level gap is wider this year and for past several years in a row. USC is seen by some rankings as having recruited better than Clemson in 5 of the last 6 seasons.

So we all know what is wrong, talent acquisition. For Coach BB, he is had time and has faced the challenge of never having his leading score return for the next season. Until this year, that has not happened. But I still think Clemson basketball is all about getting the right Jimmy & Joes to stay for 3 years or more. My biggest concern is why so many transfers.

My challenge to you since you love Clemson basketball:

· Find out why folks are transferring. Ask a coach.

· Get Clemson basketball coaches on your show more.

· Interview a coach on your blog twice a month.

· Start more conversations about what is needed for Clemson basketball to start narrowing the talent gap and to consistently attract quality basketball players (not just athletes) to sign and stay at Clemson.

If you love Clemson basketball and with your position of being a consistent and frequent voice within the Clemson community, what can you do to help Clemson Basketball?

I know what I have to do: give it more of my support it if I want things to change.

You hit the nail on the head with my priorities. Clemson football is first. Clemson baseball is second and is ahead of basketball. I love winning titles and playing at a high level. Over the last 20 years, I have rarely missed a home game for the top three sports here, but baseball is easier to watch due to the level of success. The reason I expect to beat South Carolina in basketball is because I have seen Clemson dominate the series over the last 40 years. Since the two rivals renewed the rivalry in 1977-78, Clemson is 34-18 in the series. I think it is ok to expect to continue that success.

I agree with you that recruiting is the major issue at Clemson. The Tigers have seen a drop in talent, and it shows in the win column.

Transfers have been an issue throughout the sport and Clemson might be getting the better end of the deal in who it has lost and who it has gained.

I wish I knew how to fix it, but will devote more time in the future. Thanks for the terrific email.

I agree with you that in hindsight it is easy to criticize Coach Brownell's timeout decisions. In my case, I have coached basketball for over 20 years, and I thought it was a bad idea to call a timeout on both cases before the results. Although I will always pull for Clemson basketball, apathy is starting to take over. I don't think that I will be watching them anymore this year. Clemson is consistently mediocre every year, and I expect more mediocrity in the future. I hope that I am wrong, and I will gladly admit it at the end of the season if that is the case.-David

I agree that apathy is close. This is the most dangerous state a program can encounter, but I don't blame fans for feeling that way.

Continue to enjoy your T-Net analyses. In a season where the glass is 99% full, how do you explain the lack of results on punt, kickoff and return teams? With Clemson's athletic talent, we should have an advantage over most ACC & other squads on our schedule, yet our strategy for several years seems to be more "lets avoid a mistake" than "lets make a play." What are your thoughts on Special Teams? Do we have a ST coach? Do we emphasize Special Teams? What do you believe is needed to make Special Teams a weapon and not a weak spot? Thanks for your insights and take care ... Soc

Clemson's special teams have been a major disappointment. The kick-off return team is as bad as any in America. The punt returns aren't much better. Danny Pearman has the coordinator title, but all assistants coach the aspects of special teams. I know they emphasize special teams, but I think it's personnel. The kick-off team doesn't have a great kicker to consistently get the ball high enough or into the end zone. The kickoff return guys are not a threat and lack speed. The punt return guys are not great. The punter struggled in the last half of the season. I think special teams come down to personnel, and we don't have the right guys there now. I would try players like Ray Ray McCloud and Deon Cain. They are inexperienced and may make mistakes. That is what happened to McCloud. He fumbled and it hurt his chances at more returns.

Do you hear of any plans on going after a punter for next year. Seems that we were placed in a situation where we gave the opponents good field position when we were kicking inside or near our 10 yd line.

I too am disappointed in this start for the basketball program. Brad has a few problems in my opinion. He hasn't been able to recruit talented big guys and he doesn't have an effective offensive mindset. He is a great defensive coach with a good scheme, but offensively he falls short. I think they may give him one more year back in Littlejohn, but if he continues this path I believe they will make a change.

I am not sure this team is a great on the defensive end either. I keep hearing about our defense, but I see the opponents get wide open looks. I am not sure what the identity of the program is at this point.

I enjoy listening to your show. My question is "is there any truth to the rumor that Auburn is trying to back out of playing us over the next couple of years?"

I saw those rumors on the internet but haven't seen anything that would leave me to believe that to be the case.