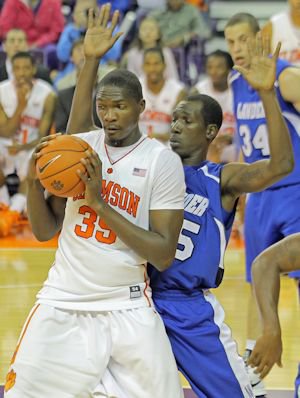 Clemson had so much going against it Saturday.

*The Tigers were facing a ranked opponent who has been red hot.

*Clemson was coming off an emotional double overtime loss on the road to Notre Dame and were ending a long streak where the had played five out of six on the road.

Landry Nnoko
So. Center
#35 6-10, 245
Montverde, FL
View Full Profile had the flu and his illness caused him to miss the game. This void helped the Cavs to out rebound Clemson 33 to 20. Virginia outscored Clemson in the paint 26-16 and had 13 second chance points compared to Clemson's six.

*The Tigers got exactly zero rebounds out of Jaron Blossomgame

Sidy Djitte
Fr. Center
#50 6-10, 240
Fayetteville, NC
View Full Profile had to fill in for Nnoko but both got in foul trouble and Djitte had a bum ankle.

*The Tigers got nothing from Jordan Roper

*The Cavs turned it over only nine times.

There was every reason in the world for this one to be a blowout but that never materialized. In fact the Tigers had a chance late in this one. Clemson was a possession or two away thanks to several positive factors.

Austin Ajukwa
Fr. Guard
#1 6-5, 190
Columbia, SC
View Full Profile who had his best game as a Tiger. Ajukwa had six points including 2-2 from three point land. The Columbia native also had two assists and a steal.

Two other reasons the game was close was the fact that this was a low possession game and Clemson turned the ball over only five times.

In the end it was too much of a talented Virginia squad and too little support from anyone not named K.J. McDaniels.

Virginia improved to 12-1 in the conference. They are not the most athletic team in the league but they are smart and highly skilled. They have good size inside and a nice blend for the inside/outside game. They are a complete team that looks like a dangerous out in the ACC and NCAA tournaments.

Speaking of the post-season tournaments, Clemson's road got tougher with two close losses last week. The Tigers head into the final third of the season at 6-6 in the league but four of the last six are at home and the Tigers will be favored in three or four games coming down the stretch.

Tomorrow night's game in Littlejohn against NC State is the latest "biggest game of the year." The Tigers and Wolfpack have similar records, resumes and chances in terms of seeding for the ACC tournament. Both are currently on the outside looking in in terms of the NCAA tournament but if either could get on a roll they may be able to play their way in. So the Tigers and Pack have what could be an early elimination game for the NCAA tournament chances tomorrow night.

Brad Brownell
Head Coach
View Full Profile said this morning that Nnoko did not practice yesterday but should be able to go a little today and there is a chance he could play against State. This is a key in helping so many aspects of the Tigers' plans. How effective he will be and how long he can go is a major aspect of the game plans for both teams.

We say it too often in sports, but Tuesday night is another "must win" for both of these squads.