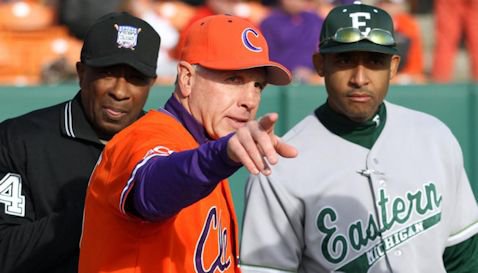 Unfortunately, the the last nine years haven't resembled the first 13 years of his Clemson tenure.

In the first 13 years, his teams went to five College World Series. The last nine they have been to one.

The first 13 years, his teams won 50 games six times. In the last nine they have not won more than 45.

In the last nine years Clemson has hosted only two regionals.

Jack Leggett is not the only reason Clemson's program has fallen. There are a lot of issues. Some are being fixed. But it has been Leggett's responsibility to fix the program.

But Leggett has been here through all of the players and all of the assistants. The common denominator has been Leggett.

Those close to the program have seen him become defiant. Last year he seemed to deny that there were issues. He has been reluctant to admit there are problems.

Dan Radakovich
Director of Athletics
View Full Profile has a decision to make soon. I met with Radakovich last year and asked about baseball. He said season ticket sales hadn't declined. But season tickets are not an indicator. Many Clemson baseball fans buy season tickets because they average less than six dollars per game. Many are on a fixed budget and view this as a bargain.

Radakovich has to measure the risk. Will Leggett bring the program back? Will the program continue to slide? Would the program fall even further under a new coach? Could a new coach get Clemson back quicker?

Who would be interested in replacing Leggett if he is not retained? I am told one of the nation's top coaches would love the job. It is one of the most attractive in the country.