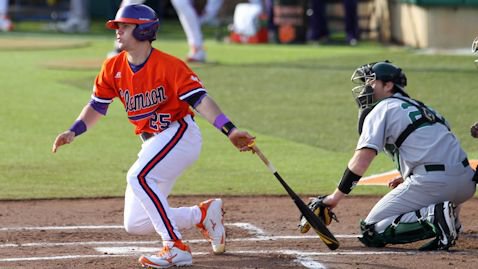 Clemson baseball enters tonight's game against Georgia with a 16-15 overall record and a 7-8 mark in the ACC. The Tigers haven't played up to expectations so far this season, but maybe the series win over North Carolina this past weekend will propel the Tigers.

Clemson has 25 games remaining in the season, but you can actually look at it as two different remaining seasons. In the next 11 games Clemson has a chance to continue some momentum. However, the final 14 games of the regular season might be a different story.

In the next 11 games, Clemson plays seven opponents who have combined for a 93-90 overall record.

Clemson's next 11 games are against schools that are not ranked in the top 60 in the RPI.

In the final 14 games, four of the six opponents are currently in the top 35 in the RPI.

The hope is the Tigers play well enough in the next 11 games to build some confidence. If that happens it would make it easier to facing the daunting task of the final 14 games.

Drew Moyer
So. RH Pitcher
#20 6-3, 215
Gilbert, SC
View Full Profile , Kevin Anderson, Lyn Price, and our great country and the men and women in uniform that protect and serve it every day, plus their families.