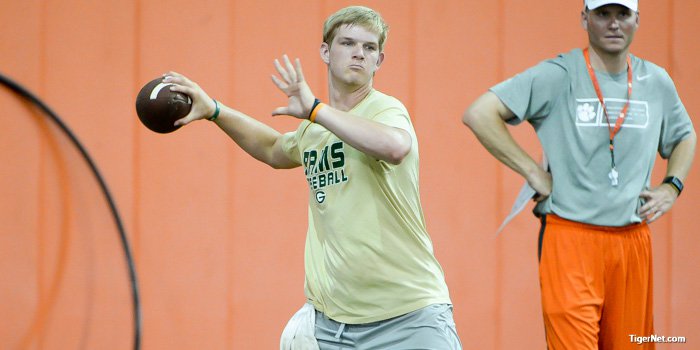 The Clemson staff received more good news as the Tigers stayed hot in recruiting with another major commitment last night. Chase Brice (6-2, 195) of Grayson High School in Loganville, GA chose the Tigers over Michigan State. Brice is a four-star prospect who is ranked 142nd overall in the Class of 2017. He became the second quarterback in the Class of 2017 to pick the Tigers this week after the nation's top quarterback in the class, Hunter Johnson, committed to Clemson Monday evening.

Clemson's plan was to have two quarterbacks in this class, and it says a lot about the attraction to this program when you can get two of the top 150 players in the country at the same position in the same week. No one will have more talent on hand at this position in 2017 with the possibility of Deshaun Watson returning for his senior season combined with Kelly Bryant, Tucker Israel, Zerrick Cooper, Hunter Johnson and Chase Brice.

The website www.saturdaysdownsouth.com came out with their "way too early" top 25 for next football season this week. I think everyone will agree that it is way too early for this, but it was nice to see the current number one team as their pre-season number one team. Clemson's brand is hot now, and pre-season expectations will be very high next year.

College juniors and red-shirt sophomores have until January 18th to file for the NFL draft. Shaq Lawson has already announced he is headed to the next level. Many think it is a forgone conclusion Mackensie Alexander and Jayron Kearse are also headed for the NFL early. Several other juniors will have decisions to make. I am told juniors like Jordan Leggett, Kevin Dodd, Wayne Gallman, Carlos Watkins, TJ Green and Cordrea Tankersley have considered the move as well.

My friend Jon Seketa has a very good book out called, "Clemson Through The Eyes of The Tiger" which is about all the former mascots and their favorite and worst games/events in the uniform.

Order today by going to clemsonmascot.com and use the promo code - b26j4y - for a 20% discount through Christmas Day.

A portion of proceeds from the books sold goes to an IPTAY Mascot Fund so they can visit children in the hospital.

If you are downtown the cost is $24.95, stop in at Tiger Sports Shop, Hubbard Young Pharmacy, Allen Creations, Variety and Frame, Judge Kellers, Tiger Town Graphics. In Anderson go to Anderson County Museum, Propp Drugs or PIP Printing by the hospital.