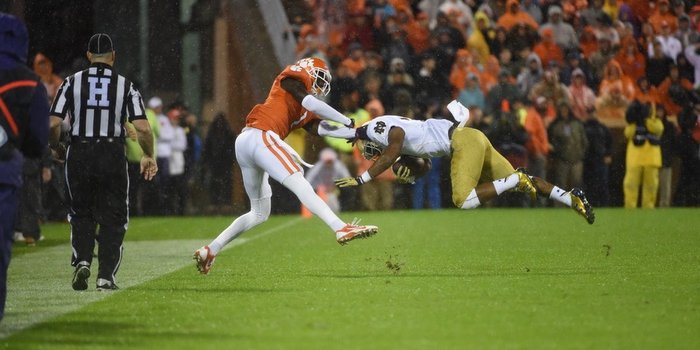 Clemson's team has often talked about playing with a chip on its shoulder because of the perceived disrespect from the national media. Clemsoning had its run again this year with some national media. It seemed like several weeks this year Clemson was put on "Upset Alert" for whatever that is worth.

Many fans have flooded my radio show with examples of certain media members who have disrespected Clemson this year. However, I think that is behind this program now. Don't get me wrong, when Clemson suffers its next loss, some will pull the "I told you so" card, but we do that when any powerhouse loses now.

I think Clemson is a media darling right now. Dabo Swinney is the talk of the college football world. He is fun. His dances are entertaining. His acronyms and sayings take off in the national media. He is what is right about the game at this point.

I was at my local hangout where I have lunch three or four days a week, and I told the owner to look around his restaurant and look at his seven or eight TVs and count how many networks had a Clemson story on at the time. You can't turn on ESPN or any of their channels or FOX and their channels and not see a Clemson story.

I mentioned one day over the last two weeks one of the benefits from this exposure and being number one was the experience of it all. The players and the staff benefit from this experience in the short term and the long term. Each week you are number one the newness wears off, and you learn how to deal with the pressure and the ultimate bullseye.

In the long term, the benefit is in case it ever happens again. Who knows how long this current level of success will last, but younger players grow up in this type of culture, and it makes it easier if it happens again in their careers.

As mentioned above, the culture is so important. The senior class will leave Clemson as the winningest class in school history. All they have known is winning. This resonates down to the juniors, sophomores, and freshmen. The expectations of winning at a high level and performing in big games are passed down to each class, and it is their responsibility to pass it along to the incoming classes. The newcomers next year will enter into a culture of playing in an elite program with an elite staff in elite environments in big games. I can't overstate the importance of what this means to this program.

If Clemson beats Syracuse Saturday, it will be the tenth win of the season. Clemson would become just the 16th program in college football history to win at least ten games in five straight seasons. Only two programs, FSU and Virginia Tech, have done it in the ACC. Currently, Alabama, Oregon, and Northern Illinois have current streaks of five or more ten win seasons, but Oregon and Northern Illinois' streaks are in jeopardy.