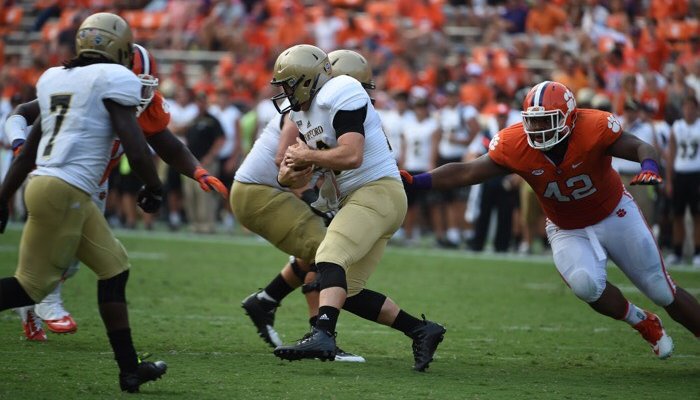 Wilkins has seen his playing time increase each week. He played 24 snaps against Wofford, 28 against Appalachian State and 35 against Louisville.

In the opener, he had six tackles. In his second game, he upped it to eight tackles and against Louisville he had ten tackles. Only Goodson's 12 tackles were more against the Cards. Wilkins was a major reason the Tigers held Louisville to 272 yards and only 19 rushing yards on 28 carries.

Clemson and Notre Dame played a couple of classic games in 1977 and 1979 with the road team winning each contest. The games were fairly similar in style. Both home teams had second half leads, but turnovers were the difference. In fact, the losing team turned the ball over five times in each game while the winning teams had only one turnover each.

One thing we won't see in this game is the conservative game plans. The game has changed dramatically since the late 70s. In fact, Clemson completed only two passes in its win in South Bend in 1979.

Tim Bourrett came up with some interesting information about these two programs. In the 38 years since these two teams last met, they have played 452 games each. Both programs have won one national title since the 1977 game, but Clemson has had more success. Clemson has won more games, has had more ten win seasons, more top 25 finishes, more bowl appearances, and more bowl wins.

Saturday is a big day in terms of recruiting. The staff is entertaining some of the best players in the country this weekend. Among them are most of the committed players in the Class of 2016. One former commitment, Shaq Smith, may be the biggest uncommitted target in that class. Smith is a five-star linebacker who is ranked 14th overall in the country by rivals.com. Summerville, SC offensive lineman John Simpson and Greensboro, NC wide out Diondre Overton will be in attendance. Those two are the highest rated offensive players still left on the board. Clemson has limited room left for the class, so much of the attention Saturday will go to the Class of 2017 and 2018. Four of the top 100 players in rivals.com rankings are scheduled to be in town. Lakeland, FL wide out J.J. Robinson, Chesapeake, Va safety Devon Hunter, Shelby, NC linebacker Justin Foster and Santee, SC safety Davondre Robinson headline a great group of the Class of 2017. Perhaps the biggest name of the Class of 2018 scheduled is Cartersville, GA quarterback Trevor Lawrence.