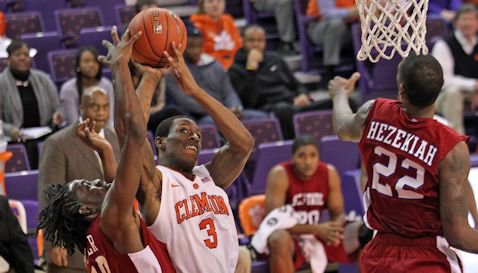 Road conference wins are few and far between for Clemson basketball so I'll take last night's 56-49 win at Virginia Tech.

The Tigers improved to 12-4 overall and 3-1 in the ACC while Virginia Tech fell to 8-8 and 1-3 in the league. Clemson has a chance to go 4-1 in the conference with a win Saturday at home against Wake Forest.

Rod Hall
Jr. Guard
#4 6-1, 210
Augusta, GA
View Full Profile finished in double figures. The Tigers shot only 40% from the field but hit six key three pointers. The Tigers lead the ACC in free throw shooting but shot only 60% on 12-20 from the line last night. However, Clemson did hit several key free throws in the closing stretch.

The Tigers got a win despite Jordan Roper

Jaron Blossomgame
RS Fr. Forward
#5 6-7, 215
Alpharetta, GA
View Full Profile combining to go 3-14 from the field and 0-5 from behind the three point line. One way they overcame a bad shooting night was by protecting the basketball. Clemson turned it over only eight times against the Hokies.

Perhaps the biggest play of the game came after the Hokies tied the game with less than two minutes remaining. Adonis Filer

Adonis Filer
So. Guard
#3 6-2, 190
Chicago, IL
View Full Profile drove the lane and made an acrobatic shot and finished the three point play with a made free throw. The Tigers would not trail again.

The Tigers held a lead for most of the contest but a turning point in the second half was Virginia Tech's zone defense. It took Clemson several minutes to adjust to the Hokies' strategy. In fact, I would expect the Tigers to face more zone in the future.

Clemson responded with another terrific defensive effort in the final few minutes and held Tech to just 49 points. The Tigers also out rebounded Virginia Tech 33-30.

The win was nice because it was not a letdown after the big win last week over Duke. Saturday's home game against Wake Forest represents a great opportunity to continue the positive momentum and I would expect a good home court advantage at Littlejohn.

Clemson All-American Vic Beasley announced Wednesday that he will return for his senior season. The return of the consensus first-team All-American in 2013 is big for several reasons. First is his presence as a pass rusher. Beasley led the ACC in sacks with 13 and finished second in tackles for loss with 23. His sack figure on a per game basis was third best in the nation and his tackle for loss figure on a per game basis ranked second. He led the nation in tackles for loss per game against teams that finished the season with a winning record (19 in eight games). He was also 10th in the nation in caused fumbles with four.

Beasley's presence means more opportunities for other Clemson defenders. Corey Crawford and Shaq Lawson will benefit when offenses slid their protection to Beasley.

It also means Clemson should field one of the best defensive lines in the country next season. Beasley, Crawford and Lawson make a dynamic trio at defensive end and the defensive tackles group consisting of Grady Jarrett, DJ Reader, DeShaun Williams, Josh Watson, Carlos Watkins and Scott Pagano have to considered among the country's deepest units.

The secondary should benefit because the pass defenses' best friend is a great pass rush.

Beasley was named a first-team All-American by the Walter Camp Foundation, USA Today, Sporting News and Sports Illustrated among others. He was a second-team selection by the Associated Press and the Football Writers Association. He was a finalist for the Ted Hendricks Award, which is given to the top defensive end in college football, and was a semifinalist for the Bednarik Award and the Lombardi Award.

Beasley has 21 career sacks and needs just eight in 2014 to break the school record of 28 held by Michael Dean Perry and Gaines Adams.