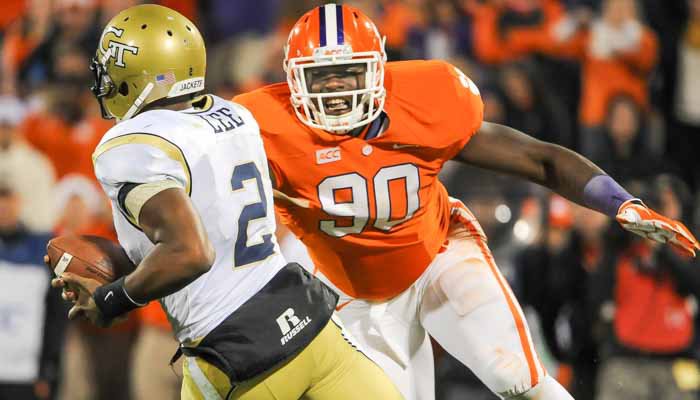 Thin and Getting Thinner

When the final seconds ticked off of the clock in the bowl game last year Clemson's staff knew three of its top four defensive ends had played their last game.

What the staff found out Tuesday was one of the top reserve defensive ends had done the same. Ebo Ogundeko's dismissal doesn't affect the starting positions in the 2015 season, but it does affect the depth chart.

Kevin Dodd
RS Jr. Defensive End
#98 6-5, 275
Taylors, SC
View Full Profile emerged from the spring as the starters which was expected. But Ogundeko emerged as a player the staff thought they could finally count on. That changed Tuesday.

So what does the depth chart look like now?

Richard Yeargin
RS Fr. Defensive End
#49 6-4, 225
Lauderdale Lakes, FL
View Full Profile is a player the staff likes. They think he has the speed and athleticism to be a very good player, but is he physically ready?

Chris Register
RS Fr. Outside Linebacker
#45 6-2, 245
Browns Summit, NC
View Full Profile made the move to defensive end in spring practice and is another player the staff thinks can be a very good player. However, like Yeargin, he is a red-shirt freshman who has yet to play a college snap.

Dane Rogers
RS So. Defensive End
#85 6-3, 260
Shelby, NC
View Full Profile is a bigger defensive end that may play defensive tackle as well. However, depth is an issue and Rogers may be forced to contribute depth at end.

Martin Aiken
RS Jr. Defensive End
#53 6-2, 255
Smoaks, SC
View Full Profile has not played a lot in his career, but he has also been behind some very good players in his career. Maybe this is the one chance he has been looking for.

Albert Huggins
Fr. Defensive Line
#67 6-3, 280
Orangeburg, SC
View Full Profile came to school a semester early and got his first college experience. He has a lot to learn and may eventually grow into a tackle, but this may force him into more action at defensive end this fall.

Austin Bryant
Fr. Defensive End
# 6-4, 250
Pavo, GA
View Full Profile is perhaps the biggest and perhaps the most ready to compete at this level. He will have a lot of adjustments to make, but he is former four-star prospect that may be forced into action.

Clelin Ferrell
Fr. Defensive End
# 6-5, 220
Richmond, VA
View Full Profile is perhaps the most athletic. Originally, it was thought that Ferrell might have to red-shirt to recover from knee surgery and get bigger physically, but he may be forced into action.

LeSamuel Davis is a freaky athlete. He is not physically ready to play every down, but could he have a role as a pass rushing specialist?

Tavaris Barnes
Defensive End (2010 - 2014)
#9 6-3, 275
Jacksonville, FL
View Full Profile hurts, but it was expected. And its not like Ogundeko was expected to be a superstar. However, a question mark just became a bigger concern as the depth chart at defensive end just became a little thinner.