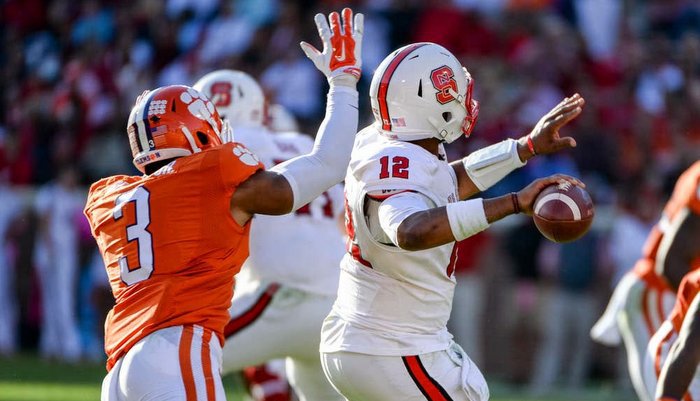 Deshaun Watson
So. Quarterback
#4 6-2, 205
Gainesville, GA
View Full Profile got hurt when the Tigers had full control of the game, Clemson hasn't lost a game where it was favored since the South Carolina game of 2012. Clemson has won 18 straight games when it was the favorite.

Dabo Swinney
Head Coach
View Full Profile has built a consistent winner that doesn't play down to the competition. The Tigers do get sky-high and play well in big games (Oklahoma, LSU, Georgia in 2013, Auburn, South Carolina in 2014), but they have been able to avoid the big letdown.

There may be several opportunities this season to get upset against unranked opponents. My guess is Louisville will be ranked between 20-25 in the pre-season poll. However, if the Cardinals lose to Auburn in the season opener, we could see Louisville drop out of the top 25. Clemson will be facing a difficult opponent on the road on a Thursday night in a hostile environment.

Georgia Tech plays at Notre Dame, at Duke and North Carolina in Atlanta before coming to Clemson in October. If the Jackets were to lose a couple of those contests I can see Tech entering the Valley unranked and we all know how difficult Paul Johnson's offense can be on opponents.

I cannot see a scenario where Boston College comes to Clemson ranked, but I also cannot see the Eagles upsetting Clemson.

Miami could be ranked when the Tigers travel south in October, but the Canes have Nebraska and Virginia Tech at home and have to go to Florida State before hosting Clemson. Some think Miami may be good enough to upset the Tigers at home.

I am one of the few people that think NC State will be ranked when Clemson rolls into Raleigh. The Wolfpack face Troy, Eastern Kentucky, Old Dominion, South Alabama, Louisville, Virginia Tech and Wake Forest before hosting Clemson. I would not be surprised to see State enter the contest at 6-1 or even 7-0.

Florida State is almost guaranteed to be ranked when the Seminoles come to Clemson the first week of November.

Like Boston College, I can't see any way Syracuse is ranked when Clemson heads up to the Carrier Dome. However, like BC, I just can't see Syracuse beating Clemson.

The same can be said for Wake Forest. Clemson will not lose to the Deacs on Senior Day.

In the regular season finale, South Carolina doesn't enter 2015 with high expectations. Barring a turn-around of the program, I would be very surprised to see the Gamecocks ranked, and Williams-Brice could be a difficult place to play in this rivalry game.