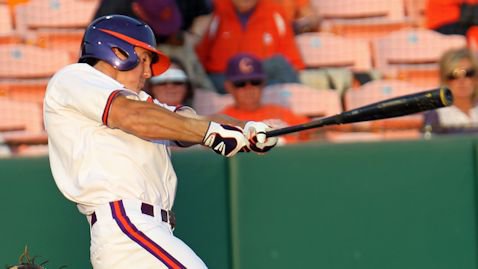 College baseball has changed in recent years and the number is not as significant as it once was, but 40 regular season wins is still a standard that the nation's elite teams strive for each season.

Clemson is currently 27-13 with 16 games left. The Tigers are also 13-8 in the ACC which is tied for second in the Atlantic Division with Florida State. The Tigers and Seminoles trail NCSU who is 14-7 by one game. Can Clemson go 13-3 down the stretch and get to 40 wins?

Mid-week games are usually not as important as the conference tilts but this time of year they become ultra-important. Clemson has seven non-conference games left including four mid-week games.

This week Clemson hosts Western Carolina. Next week the Tigers hosts Furman on Tuesday and travel to Furman on Wednesday. Clemson will hosts Georgia Southern for three non-conference games the following weekend and will end the home schedule with a mid-week game with South Carolina-Upstate.

Western Carolina is perhaps the toughest of the non-conference opponents remaining on the schedule. The Catamounts are 26-16 overall and 15-6 in the Southern Conference. WCU is currently 87th in the RPI.

Furman will see Clemson twice next week. The Paladins are 21-17 overall and 9-12 in the Southern Conference. Furman is currently 99th in the latest RPI.

Georgia Southern will come to Clemson for a three-game set in a break from ACC action. The Eagles are 21-19 overall and 10-11 in the Southern Conference and are 110th in the latest RPI.

Clemson has three ACC series remaining on the schedule. Clemson will face Georgia Tech in a key three game series in Clemson this weekend. The Yellow Jackets are 27-13 overall and 11-10 in the conference. Tech is coming off a series where they got swept by NC State. Georgia Tech is currently 22nd in the latest RPI.

Next weekend Maryland comes to Clemson for a three-game set and this series presents a chance for Clemson to get a sweep. The Terrapins are 21-20 overall and 6-15 in the league. Maryland is ranked 48th in the RPI.

Clemson ends its regular season with a three game series at Florida State. The Seminoles are 31-9 overall and 13-8 in the league. FSU is seventh in today's RPI.

Currently Clemson and Florida State trail NC State by one game with each team having three conference series remaining.

As mentioned above Clemson will host Georgia Tech and Maryland. Clemson does have to travel to Tallahassee for a series with FSU.

Florida State will host Wake Forest this weekend. They have to travel to Raleigh to face NC State and wrap the season up with a home series with Clemson.

NC State has the one game lead but has a difficult test in facing top-ranked North Carolina this weekend. The Wolfpack also host FSU and visit Duke.

If the selection committee values the RPI rating then Clemson is in good shape to host. The Tigers are currently 13th in the RPI and have played the nation's 11th most difficult schedule.

Clemson looks in solid shape to host one of the 16 regionals based upon RPI but some factors may hurt the Tigers. Geography may hurt. The NCAA usually puts a heavy emphasis on the southern schools as sites but even that number can be limited.

At this point Clemson is sixth among ACC schools in RPI. North Carolina is number one in RPI and took two of three from the Tigers. Therefore it is pretty obvious they would get a regional over Clemson.

Virginia is third in the RPI and they took two of three from Clemson in Tigertown. It is safe to assume they are ahead of Clemson in the pecking order for hosting.

Florida State is seventh in the RPI and hosts Clemson in May. At this point they have a stronger resume.

NC State lost two of three to Clemson in Raleigh earlier this season but the Wolfpack now have taken over the lead in the Atlantic Division. State is eighth in the RPI and they look to have a strong case to host.

Miami is one ahead of Clemson in the RPI and the Canes just beat the Tigers twice, so they will present a strong bid.

In the SEC, LSU is currently second in the RPI and usually host. Vanderbilt is fourth and have a great case to host as well. Mississippi State is 10th in the RPI and South Carolina is 11th. The SEC looks to have four solid candidates to host regionals.

The good news that national powers like Texas, Southern Cal, Stanford and Oklahoma State are having down seasons.

In summary, Clemson has a chance to continue to ascend in the RPI and get to 40 wins. The Tigers still a lot of important games coming up. They will be in competition with Georgia Tech for a regional, so this weekend's games are big. All of the mid-week games are big because of the 40 win goal. The FSU series will be big in terms of RPI and standings in the division.

The Tigers have improved in the second half of the season and have now set themselves up for a shot at bigger goals in the last 16 games of the regular season.