When Clemson was on a roll in the late stages of the season, it seemed like everything was going right. The Tigers did the big things well but they also did the little things well.

After beating Florida State in game one of the series at Florida State, Clemson seemed to have everything in the world to play for. They needed a couple of things to happen. They needed NC State to drop one game against Duke and the Tigers needed to beat FSU in one of the final two games of the season. Neither happened.

Clemson could not get the big hit at the right time and it seemed the Tigers left more runners on base than any series of the season. Time and time again Clemson put runners in scoring position only to come away empty handed.

As a result of losing two of three in Tallahassee, Clemson dropped to third in the Atlantic Division and fifth in the ACC.

Clemson still was riding high and needed one win to get to 40 wins. That number was in many minds the magic one to host a regional. Instead, Clemson once again left the bases loaded against NC State in the opening game. In game two they blew a five run lead in the top of the ninth inning to lose to the top seed in the NCAA tournament in North Carolina. In the final game, Clemson looked lifeless and got pounded by Miami.

As a result of going 0-3 in the ACC tournament and 0-5 to end the season, the Tigers were not chosen to host a regional and now is the number two seed in Columbia in the same regional as South Carolina, Liberty and St. Louis.Regaining Momentum

Clemson's coaching staff is now faced with the task of rebuilding the confidence in this young baseball team. That is the first order of business.

The good news is that this team is young. They showed a bunch of resiliency earlier in the season and have bounced back several times this year.

If things go well in Columbia, this group can go to Chapel Hill an get revenge on North Carolina and eliminate the Tar Heels.

As bad as things look right now, imagine how things group would feel if it could beat two of its biggest rivals in back-to-back weekends and eliminate them. Imagine what this group could accomplish by making it to Omaha.

Finally, unless there is a setback this week, Matthew Crownover 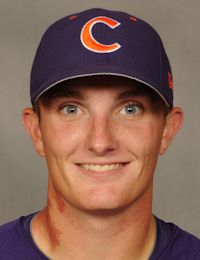 Matthew Crownover
Fr. LH Pitcher
#44 5-11, 205
Ringgold, GA
View Full Profile should be back for this weekend. The Tigers certainly missed his arm in the starting rotation is past weekend.

This is a great opportunity and that is the way Clemson needs to go about this. The Tigers need to view this as an opportunity and understand that all of the pressure is on the Gamecocks this weekend and the Tar Heels if they can advance to next weekend.

Clemson cannot go not into this series thinking about South Carolina winning 20 of the last 28 games in the series. Instead, Clemson needs to look at this weekend as an amazing opportunity.