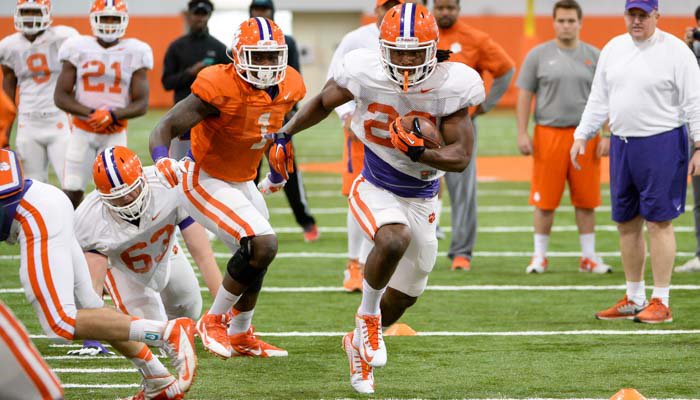 I am a big Tony Elliott fan. He is one of the brightest coaches I have ever been around. In an industry that used to feature opportunities for former "jocks," Elliott has an engineering mind. I have seen some very good coordinators at Clemson, but I am not sure I have seen anyone make better adjustments than Elliott. This is what Elliott may do best. The proof is in the pudding. Clemson is 15-1 with Elliott at the steering wheel for the offense.

There were times in his freshman season where Gallman looked promising. He had 101 yards against Syracuse and 106 against Wake Forest. However, it was Gallman's 191 yards against South Carolina that propelled him to his monster season last year. Yards after contact are a big part of Gallman's style and helped him to nine 100-yard performances, including three of 150 or more.

So Elliott knows what he has in Gallman. The story at running back this spring will be the development of depth. Perhaps the player with the most to gain is Adam Choice.

There was a time in their freshman seasons where Choice was ahead of Gallman, but a knee injury took away the second half of that season from Choice. Perhaps he could have played some last season, but the staff had the luxury of red-shirting Choice.

Since we last saw him on the field, Choice has impressed his coaches with a strong bowl practice. I believe we could see Choice as the solid number two back coming out of the spring.

Tyshon Dye is a popular player who continues to battle, and this spring is yet another opportunity for the rising junior. Injuries, experience, and confidence have provided Dye with an uphill battle, but the running back-room is less crowded this spring, and more carries may be available.

C.J. Fuller showed promise as a redshirt freshman. He had a key touchdown and 24 yards on four carries against South Carolina. Like Dye, Fuller has a chance to impress Elliott enough to grab more carries in 2016.

In my mind, Gallman has little to prove this spring. And if Choice is healthy, he is the second best option. Dye and Fuller have ability but will need to make a move before heralded freshman Tavien Feaster gets to campus. Feaster will provide a home-run threat that the current backs don't posses, and that will be a storyline in August.

In summary, Choice needs experience and this spring he will get a large percentage of the carries. Dye and Fuller need to take the next step. They need to show consistency and earn the trust of Elliott. This is what spring practice is all about when you have a record-breaking back returning.