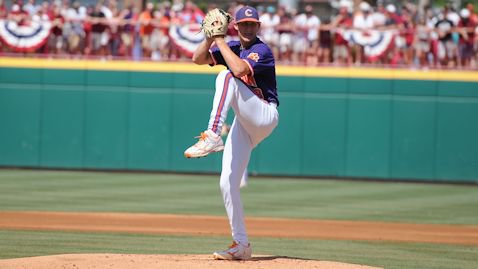 Push the Schedule Back

As I sat in Doug Kingsmore Stadium Monday night freezing once again, a thought crossed my mind. What not push the schedule back?

Granted that May usually does not feel like this but it was February or March type temperatures that got me thinking. It reminded me of what we put ourselves through every February.

I say let's think about moving the schedule back about four weeks. Here are the pros:

I never understood the idea of baseball in February. The northern schools are at a huge disadvantage and even the South is too cold for baseball in February. This year's weather is such a strange weather year but I can't remember too many February days that have been suitable for baseball. The season should start in the middle of March. This means the College World Series would end in late July. Baseball is a summer game not a winter one.

The season currently ends several weeks after the spring semester ends. For instance, Clemson ended the spring semester last week but if they make it to Omaha the Tigers will play baseball for almost two months. Because of conference tournaments, regionals, super regionals and the College World Series, college baseball players usually can't go to the first semester of summer school. If you backed the season up a month then the regular season would still be going on for the first semester of summer school. This means players could take a morning class or two in summer school.

I can't help but to think that cold weather leads to arm injuries for pitchers. I would think pitchers would like to start a month later. This seems like a good idea for their arms in the long run.

I love Clemson baseball but I hate cold weather. I can't tell you how many times I have froze my butt off in the cold, windy conditions in February. I would think that fans would come out to see more baseball if you moved the season back a month. College students would not be around for summer school like the spring semester but families could stay later for night games because school would be out in June and July.

Here are the cons:

The Major League Baseball draft is a major detractor from this plan. I would think MLB would not want to move their draft back a month but college baseball doesn't owe pro baseball anything. This would be a way for the college game to stick it to pro baseball.

Many college coaches make a healthy sum of money with their summer camps. If you moved the regular season back a month, many coaches would have to move their camps as well. Would the first week in August work for summer camps? Could coaches ever vote to take a major pay cut?

The Cape Cod League is the most famous summer league but there are summer leagues all over the country. Personally I don't follow the summer leagues. I think college baseball is more interesting but the leagues would almost certainly disappear.

In summary, I can see some of the negatives but I really think college baseball and its fans would benefit with a move back to a mid-March start to the season. I think the pros outweigh the cons.