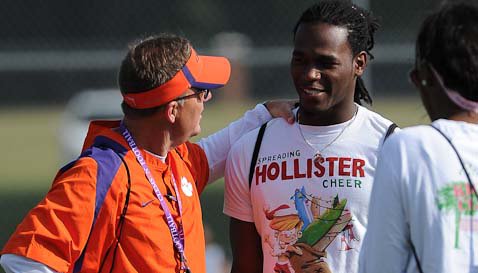 I had a chance to catch a few periods of practice yesterday and I wanted to pass along a few things I noticed.

First, it is important to know that it is not fair to judge a player, a position unit or a team in less than one hour. These guys can improve rapidly. However, I know people are starved for information and I wanted to pass along a few tidbits. First, this team looks better physically than any I have seen in some time.

I did not watch very much of the quarterbacks because I thought my time would have been better served watching other positions. Tajh Boyd looks like he has every time I have watched him the last three years. He is a polished product.

My one regret with this position is that I did not get a chance to see how Chad Kelly was moving around. I still have my doubts on how effective he would be if forced into duty. One medical assistant told me yesterday that nine months is a miracle and Kelly has had less than five months so far.

The Clemson message boards have Tyshon Dye winning the Heisman. It is too early to tell how much of an exaggeration that is, but he did look good. He is solid in his 217-pound frame and he ran hard. I can see a big future but am not sure how far away that will be. A few runs in a PAW drill were impressive but I am still waiting to see more. He is a much better back than I was expecting.

Wayne Gallman also ran hard and looks like he could grow into a nice back. In the limited carries he ran high but could be taught to lower his pads.

I am still high on Roderick McDowell but Dye came into his freshman year with a higher ceiling than all of the backs on scholarship.

Adam Humphries, Martavis Bryant and TJ Green were limited. Green got good news today when his MRI showed no ACL tear. Charone Peake is poised for a big season. Sammy Watkins looked in much better shape than he was last season. I would be surprised if he did not return to his form as a true freshman. Germone Hopper looks a little thicker this season. Mike Williams reminds me of Kevin Youngblood at this stage.

The tight end that caught my attention was Jordan Leggett. The true freshman looks a little bigger than he did in the spring and still moves well. I think he could see early action in the opener.

The offensive line got the best of the defensive line in the PAW drills. I was impressed with Tyrone Crowder. He has a great flexibility. I had an observer at practice tell me he is the most flexible of any of the offensive linemen despite his weight. I think he has a huge future.

Jay Guillermo really impressed me. He plays at a good pad level and brought great effort.

This was my first peek at Maverick Morris and I like his upside. After a likely redshirt season, Morris could compete next season.

The defensive line got beat up pretty good in this drill but observers say this unit is improved. D.J. Reader was the one defensive tackle that stood out to me. He played with emotion and is extremely athletic.

This was my first look at Scott Pagano and I came away very impressed. He is a good looking defensive tackle. You could tell why Florida, LSU and Alabama recruited him.

The biggest standout in my limited time was Stephone Anthony. He looked more mature. Tony Steward looks slimmer and quicker. Ben Boulware looks bigger than when I saw him last. He has worked hard in the offseason.

There are so many new faces in the secondary, it was hard to watch them all. Mackensie Alexander was limited with a groin injury but I hear great things with. Jayron Kearse is a great looking prospect. He is a long, lean looking athlete. Korrin Wiggins looks like a good prospect and I hear great things about his maturity. I did not get a chance to watch Adrian Baker but he looks slim and has very long arms. I also did not get a chance to see much of Jadar Johnson and the rest of the newcomers.

It is way too early to tell but if I had to guess I would put my money on the number of true freshman that will play at seven or eight. Dye, Mike Williams, Jordan Leggett, Shaq Lawson, Ben Boulware, Mackensie Alexander, Jayron Kearse and one more defensive back look like my best bets at this point.