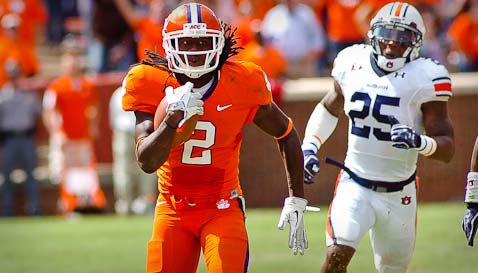 I was sitting around Sunday afternoon thinking about the last two bowl games and debating in my head which win was better.

The OSU win was a BCS win.  It gave Urban Meyer only his second loss as a Buckeye.

In the end, I am not sure which was better and more fulfilling, but it is a fun debate.

I was watching the game with Ryan and after the second series of the game I told him,   "Clemson is the better team.  Clemson is better at every position except safety, offensive line and running back."

Much like the LSU game, it took a ton of Tiger mistakes to let Ohio State back into the game.

I thought the game plans on both sides of the ball were very sound.  Ohio State had three new starters in the secondary, so Chad Morris

Chad Morris
Offensive Coordinator / QBs
View Full Profile pounded the Buckeyes on the perimeter.  The Tigers continued to pressure Ohio State on the outside.

Brent Venables
Defensive Coordinator / Linebackers
View Full Profile drew up a masterpiece on defense also.  He took away the inside running game and held Carlos Hyde under his average.  The Tigers also did a great job of keeping Braxton Miller in the pocket and took away his running ability.  If the safeties had not lost coverage several times, this one could have been a blowout.

The offensive star was Sammy Watkins

Watkins also tied the Clemson record for touchdown receptions in a career.  He finished with 27, the same amount DeAndre Hopkins

DeAndre Hopkins
Wide Receiver (2010 - 2012)
#6 6-2, 205
Central, SC
View Full Profile .  Watkins set the Clemson single season and career reception marks.  He finished the season with 101 catches, 13 more than Aaron Kelly had in 2007.   He finished his career with 240 receptions, eight more than Kelly had between 2005-08.  Watkins also set the Clemson single season record for receiving yardage.  He finished with 1464, breaking the record of 1405 set by Hopkins last year.

Tajh Boyd
RS Sr. Quarterback
#10 6-1, 225
Hampton, VA
View Full Profile had a brilliant game if you take away two bad decisions that led to interceptions.  Boyd scored the first touchdown of the game on a 48-yard touchdown run that was the longest run of his career.

I was glad to see Rod McDowell have a big night.  McDowell finished with 69 yards rushing to go over the 1000-yard mark.  He finished with 1023 yards for the season.  That gives Clemson a 1000-yard rusher, 1000-yard receiver and a 3000-yard passer in the same season for the third straight year.

Other offensive stars include Jordan Leggett

The offensive line played well enough to help the Tigers out-rush OSU 198 to 193 and average 5.5 yards per carry, compared to the Buckeyes 4 yards per carry.

The defense was led by great efforts from Stephone Anthony

Spencer Shuey
Gr. Linebacker
#33 6-3, 230
Charlotte, NC
View Full Profile , who helped hold the Buckeyes to 100 yards under their average for the season.  The defensive line was led by Grady Jarrett

So the Tigers had enough mistakes to lose but overcame them with a dominating performance.  Clemson finished the season with 11 wins for the second consecutive year, the only time in school history Clemson has won at least 11 games in consecutive seasons.  This victory was the 38th for the 2013 seniors.  That’s the most by a senior class since the 1991 group won 39.

The win was Dabo Swinney

Yes, Friday night was a historical victory.  It was a terrific way to end a season and the career of many Tiger greats.  Hopefully it is yet another sign of a building powerhouse.