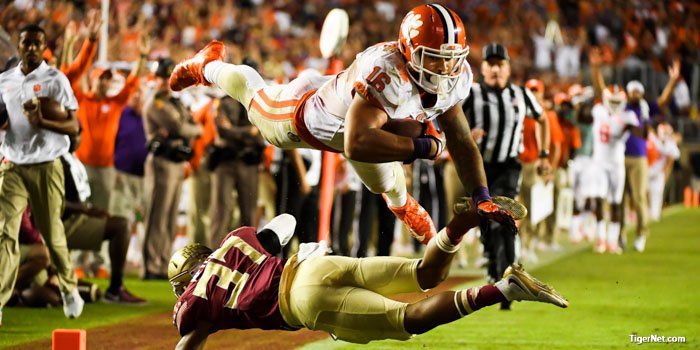 One For the Ages

I have seen more than my fair share of great Clemson wins, but Saturday night's 37-34 win over a Florida State in Tallahassee shouldn't take a backseat to any of them.

A conversation I have had a few times since Saturday night centers on where this win ranks among great wins in Clemson history? My answer is, "How can you compare so many? They are piling up!"

Close wins are becoming a trend. Since 2011, Clemson is 18-2 in games decided by one score or less.

And to think, Dabo says, "The best is yet to come," and I still believe him.

And yes, I still am convinced the best is yet to come.

Saturday night I will take memories like 14-0 lead, two fourth quarter comebacks and the two sacks that ended the game. However, my lasting memory will be exiting the stadium and hearing the Clemson fans celebrating as they circled down the ramps of the internal erector set that is Doak Campbell Stadium. The noise from the FSU crowd was very good, but the loudest noise I heard all night was the "Cadence Count" and "We Too Deep" chants from the thousands of Tigers making their way to the exits.

The Seminoles were desperate and maybe that was the most impressive part of the win. FSU could have saved their season. They could have climbed back in the top ten. They could have won 10 regular season games and made it into a New Year's Day Six Bowl. Instead, the Noles have now lost six of their last 15 games. They are now the third best team in the Atlantic Division. They had six five-star prospects on hand. This was their chance. They knew their backs were against the wall. This was a team that needed a huge win to re-emerge on the national scene, but instead was a team that blew two fourth quarter leads to lose at home.

Now Clemson awaits the first national college football playoff rankings which come out tonight. Clemson should land in the top three and on paper will be tested less in the final month of the season compared to other contenders.

Saturday night wasn't perfect, but it was another classic Clemson memory and another step for one of the nation's elite football programs. Where does it rank? How can you compare so many games?