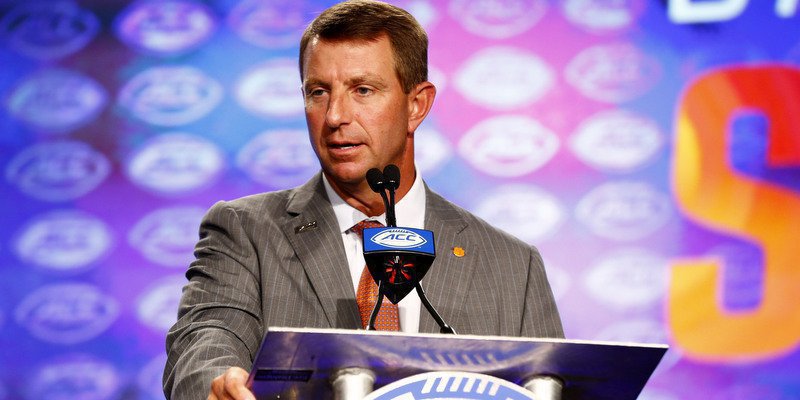 I know some of you out there are negative personalities and always take the pessimist's point of view. For those types, there is plenty of ammunition from Saturday. NC State had 27 first downs, 491 yards, 338 passing yards, Kelly Bryant didn’t throw the ball as well, etc.

But if you are looking for more pessimism then you probably should stop reading this blog at this point.

The way I see it Clemson won another huge game against a ranked opponent on the road despite not playing its best football game. That is the mark of a championship program.

Clemson lost the best player in school history in Deshaun Watson, a first-round draft pick at wide receiver in Mike Williams, the player who caught more passes than anyone in school history in Artavis Scott, the tight end who caught more passes than any other tight end in school history in Jordan Leggett, the running back who set the school single-season rushing record in Wayne Gallman, a three-year starter at center, an emotional leader at linebacker, an NFL defensive tackle and corner and a leader at safety from last year’s team. This team has three seniors on its two-deep. The fact that they are still in position to win the division, the conference and make the playoffs again is a true testament to how good this program is.

My eyes saw a team fight back and find a way to get to 8-1 on the road in a difficult environment. I saw a team use an incredible punt return as a spark. I saw a team bust an 89-yard emotional haymaker of a run. I witnessed a defense make halftime adjustments and hold a good offense to 10 points in the second half. I saw a quarterback punt the ball 45 yards and pin the opponent down inside the one. I saw a defense hold State to 3 of 13 on third downs.

This one was a typical November war. This is what college football is in November. Everyone is fatigued. Everyone is battered and bruised. Sometimes you have to just find a way to win.

Give NC State credit. They are experienced and talented. They had a good plan on offense. Ryan Finley played a terrific game. This was their big game. They had a small window of opportunity with this class to win the division by winning at home, and Clemson came in and ripped their hearts out.

In the game’s final drive Clemson had Ray Ray McCloud at cornerback. He had switched numbers to be able to play on the field at the same time as Kendall Joseph, who is also banged up at this time. AJ Terrell was injured during the game. Marcus Edmond and Mark Fields didn’t make the trip. Tanner Muse has a broken hand and was replaced by KJ Wallace, who had the final interception. Van Smith and Ryan Carter were the only two starters in the secondary who were still playing. Yet, the Tigers found a way to make a play.

The negative fan asked why waste time on the McCloud experiment in the fall. The negative fan blasted him for fumbles last year and said to never put him back there as a punt returner ever again. I am thankful a staff had the foresight that others didn’t.

It won't be easy from here on out. FSU will bring its best. So will the arch-rival on the road. A potential matchup against an undefeated Miami team in Charlotte won’t be easy. However, I am ecstatic this program can have that in front of it in what is a slight rebuilding year.

I am thankful we were not Ohio State or Penn State Saturday. I am thankful we are not Georgia Tech, NC State, North Carolina, Florida, Tennessee, Texas A&M and many others who don’t have what we have.

If I want to be negative, I can turn on political TV or radio; I can go to Facebook, or figure something to be negative about. Clemson football gives me joy and I am joyful that this November gives us more opportunities than I could have imagined due to another great road win in Raleigh.