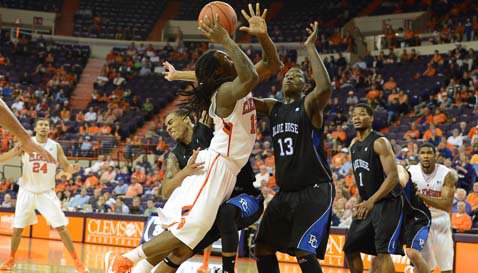 A baseball sweep at the hands of South Carolina took an awful lot of attention away from perhaps the biggest story in Clemson athletics last weekend.   Brad Brownell

Tonight the Tigers play their next to last regular season game when they host Miami.  The Hurricanes enter tonight's contest 15-14 overall and 6-10 in the ACC.  Clemson is currently 18-10 overall and 9-7 in the ACC.

Sunday was a nice win and one that Clemson fans should have enjoyed.  In their glory years Maryland would rub wins in the face of its opponents by singing the song "Amen."  Clemson fans didn't have a chance to sing that song, but the Tiger victory meant Clemson beat Maryland in the final games of both football and basketball.

I am a little surprised Maryland's departure has not been a bigger story in this academic year.  Maryland was a charter member of the Atlantic Coast Conference.  In the last 60 years the Terps have built some nice rivalries, so I thought it would have been a bigger deal to see them leave.

My guess is that most ACC fans don't like the road trip to College Park and many are looking to Louisville coming into the league.

Clemson has a chance to finish fifth in the ACC with a win tonight and another one Saturday against Pittsburgh.  If the two teams are tied, the first tiebreaker is head-to-head.  If Clemson wins Saturday that would mean Clemson and Pittsburgh would have split their two regular season games with each team winning on its home court.  Clemson would win the next tie breaker, which is based on each team's record against the top seeds.  Neither Pittsburgh nor Clemson beat Virginia, Syracuse or North Carolina but Clemson did beat Duke.  The win over the Blue Devils would mean Clemson would win a potential tie breaker and thus grab the fifth seed.

Miami can finish 8-10 in the ACC if they win both games this week.  The Hurricanes can still finish tied for seventh.

The new ACC tournament format gives the top four seeds two byes in the tournament.  Teams seeded 5-9 will get a first round bye while teams seeded 10-15 have to play in the opening round.  Obviously the Tigers and Hurricanes could use a huge win tonight.

Clemson's Superman did it again Sunday against Maryland.  His 26 points, 14 rebounds and six blocks were another amazing effort from the Clemson junior.  McDaniels has made a very good case to be a first team All-ACC which is great for Clemson basketball.  On the other hand, his brilliant junior season also means he has elevated his status with the NBA Draft and he may leave school with a year of eligibility remaining.  If that is the case, I am going to enjoy the last two regular season home games in case these are the last two we get to see McDaniels in a Clemson uniform.

One key to the Tigers recent success has been more consistent play from players other than McDaniels.  On Sunday Clemson got four players in double figures including 16 points from Rod Hall

One major concern for this team is rebounding.  Clemson was not able to exploit its advantage in the loss at Wake Forest and Sunday was even worse.  Maryland out-rebounded Clemson 63-47.  Part of the issue has been foul trouble.  Another issue has been inexperience in the post.  However, Clemson must improve its rebounding if it plans to win tonight and Saturday against Pittsburgh.