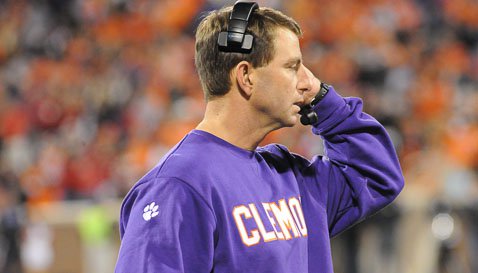 Every year we hear how huge the Georgia-South Carolina game is.  We hear how the winner has a major advantage in the race to represent the SEC East in the SEC title game in Atlanta every December.  However, it hardly ever works out that way.  In fact, the winner of that game seldom represents the East.

Every game is big in college football but in the old days when Clemson and Georgia played each other ever September, it was a great indicator of what kind of team each program will have.

Going back to the 1977 season, the winner of the Georgia-Clemson game often goes on to great things while the loser struggles.  That season Clemson beat the Dawgs in Athens 7-6 despite Georgia being ranked 17th.  Clemson went on to an 8-3-1 mark and finished 19th while Georgia went 5-6.

In 1981 the Tigers reversed their fortunes and upset fourth ranked Georgia 13-3.  Clemson went on to a 12-0 mark and a national title.

The series saw both teams win games in the mid-‘80s and both teams go on to good campaigns.

And last year Clemson won a thrilling 38-35 decision.  The Tigers went 11-2 and finished seventh in the country.  Georgia went 8-5.

The formula doesn't always work.  Sometimes the loser has gone on great seasons while the winner falls apart.

Sometimes the game itself is not the back breaker.  For example, last season Georgia lost the opener to the Tigers but climbed back into the top six in the polls one month later after beating South Carolina, LSU and Tennessee.  The Dawgs fell apart at seasons end due to injuries but it was not the Clemson loss that ruined their season.  The opener did not send them into a tailspin.

In fact, now that we have a four team playoff, the game becomes very important to win but not devastating to lose.  The winner gets immediate dividends, but the loser has plenty of time to grab the selection committee’s attention and both can still win their divisions and conferences.

So the game has changed with the first year of the playoffs.  The game is now an opportunity.  A win gives the team a chance at a mulligan later in the year of needed.  For example, Georgia could beat Clemson but lose to an SEC opponent and still win the division and the SEC.  This would give them a great shot at the playoff.

Clemson could beat Georgia but lose to FSU and still have a shot to go to the playoffs.  An 11-1 Clemson team with wins over Georgia and South Carolina and the only loss to the nation's top team would be attractive.

This may the last regular season meeting between Clemson and Georgia for some time but I hope that is not the case.  This game represents a great opportunity and I would hate to see that opportunity go away.