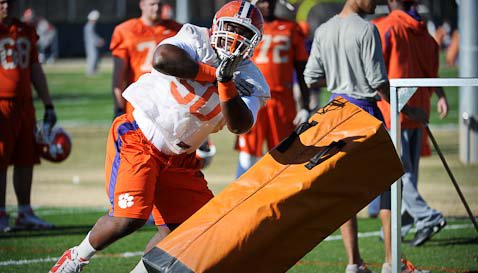 In my formative years as a Clemson fan, I grew up watching the Tigers dominate up front defensively. Clemson prided itself as "Linebacker U." but it all started up front.

Trevor Pryce
Defensive Tackle (1996)
# 6-5, 290
Brooklyn, NY
View Full Profile but the decline of the program could be seen in the number of great defensive tackles and how it had declined as well.

I think there are two reasons Clemson's defensive tackles have improved to the point where they have helped the Tigers who have won 30-plus games, an ACC title and a BCS bowl in the last three years. First is defensive tackle coach Dan Brooks

Dan Brooks
Assistant Coach / Defensive Line
View Full Profile . I am not sure there is a better defensive tackle coach in the country. Brooks has been coaching defensive line at powers like Florida, North Carolina and Tennessee since 1983. Brooks coached at Florida from 1983-1987, at North Carolina from 1988-1993 and Tennessee from 1994-2008.

Once Brooks arrived at Clemson the defensive tackle play has improved. Brandon Thompson

Jarvis Jenkins
Sr. Defensive Tackle
#99 6-4, 315
Clemson, SC
View Full Profile who was a first team All-ACC before moving on to the NFL.

This season Clemson has what one pre-season publication has called the nation's fourth best defensive line. A major reason for that is the depth Brooks has helped develop at defensive tackle. Grady Jarrett

Player development has been the other huge key to the success of the unit. Carlos Watkins was highly recruited and chose Clemson over Florida and Scott Pagano chose Clemson over schools like Alabama and LSU. However most of this productive group was not that highly recruited. Few coaches or talent evaluators envisioned Grady Jarrett becoming perhaps the most dominant defensive tackle in the ACC this season. DeShawn Williams was not highly recruited out of Daniel High School in Central, SC. Josh Watson was highly rated out of prep school but his recruiting was not on the national stage. D.J. Reader had some ACC offers but was not thought of as a national prospect.

Brooks and the entire developmental staff deserve a lot of credit for turning what was once a weak spot into one of the nationally ranked defensive tackle groups in the country.

Johnson joins Greenwood, SC native Gage Cervenka who also committed to Clemson a few weeks ago. The Emerald High School defensive tackle had offers from Miami, NC State and Virginia Tech among others. He is a wrestling star that saw his stock soar in the spring.

Clemson will take at least one more defensive tackle in the upcoming recruiting class and can now afford to be very selective in this process.

At Clemson the defensive tackle unit looks like it is in good shape for the foreseeable future.