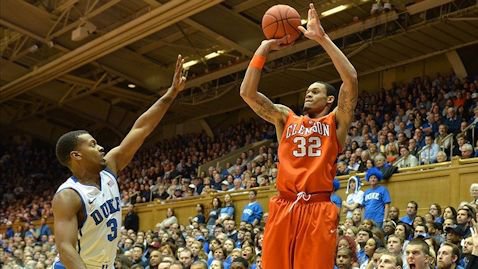 Every loss hurts. I don't care if it is a 10-9 loss in football or a 30-point loss in basketball. Every time my team loses it hurts.

The late legendary NFL head coach George Allen said, "Every time you lose, you die a little bit. Not all of you but just a little. Maybe just your liver."

Last night felt like more painful than your average loss for Clemson basketball. The Tigers didn't play well on either end of the court but they did what I ask of all of my favorite teams in that they played hard.

The Tigers fought and fought again. They were coming off of a pretty gritty performance against the nation's number one team in Syracuse Sunday night and had just one day to prepare for another road game. However the Tigers left everything on the floor in the double overtime loss to the Irish.

This was not a game to save on the DVR in terms of basketball fundamentals. Clemson could not adjust to Notre Dame's screen game early. On offense Clemson once again struggled for most of the game. But this was one to save for two reasons. First was the effort. Second was K.J. McDaniels

McDaniels was sensational. He produced one of the best performances I have seen from a Tiger in a long time.

He led Clemson with 30 points. It was his ninth 20-point effort of the season and first career 30-point outing. McDaniels’ 30-point effort was the first in 119 games under Brad Brownell

McDaniels also had 14 rebounds, surpassing his previous best of 12 against Wake Forest earlier this season. It was his second straight double-double and his sixth of the season. McDaniels has now reached double figures in 20 of Clemson’s 23 games this season.

He had five blocked shots Tuesday, the fourth time this season and eighth time in his career he had at least that many in a game. McDaniels produced career highs for both field goals made (13) and attempted (24) and tied a personal best with three assists. The 13 made field goals tied Devin Booker

He did everything. There is no truth to the rumor that McDaniels washed the team uniforms when he got back on campus early this morning.

A friend of mine refers to this team as K.J. McDaniels and the McDanielettes. He said this team reminds him of the Will Soloman days.

Rod Hall
Jr. Guard
#4 6-1, 210
Augusta, GA
View Full Profile scored 12 points, his highest output since the ACC opener at Boston College on Jan. 4 but Hall hit only one of two free throws late. If he hits both, i believe the Tigers win a thriller.

Damarcus Harrison
Jr. Guard
#21 6-4, 200
Greenwood, SC
View Full Profile had eight points. He made multiple three-pointers for the first time since the Davidson game on Nov. 22.

Now the Tigers have the red hot Virginia Saturday at noon. The game will be the final contest of a rugged seven game stretch. A win would give Clemson a 3-4 mark in that stretch. A loss would mean a 2-5 record. With the Tigers squarely on the bubble in terms of the NCAA tournament, a win over a highly ranked Virginia squad would do wonders for this team. Hopefully the Warrior will return and his supporting cast will be inspired.