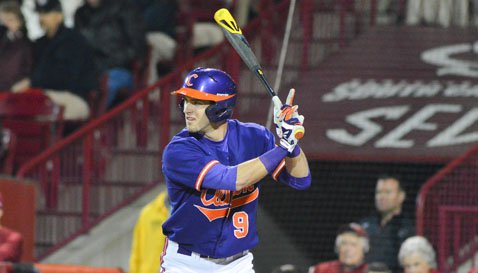 We all got sick of seeing the five fingers deal South Carolina fans would put up in pictures after the Gamecocks beat Clemson in football each year from 2009 until 2013. Thank goodness Watson, Gallman, Scott, Beasley, Williams and the boys started a new streak this year by dominating the arch rival.

Well, its time to get this baseball series back in order.

Clemson has lost its way in this baseball series. It's past time to get it back to where we know it should be.

Some say this is a Jack Leggett

Wilhelm lost seven straight games to the Gamecocks from 1983 to 1985, but responded by winning 17 of the next 23 against South Carolina.

His Tigers lost five in a row in 1990 and 1991, but Wilhelm then answered by beating South Carolina nine of out 10. He actually beat the Gamecocks in nine of the last 11 times he faced them.

It's time Leggett and his crew respond.

Some say the 2002 losses to South Carolina in Omaha turned the series around but actually that is not the case. After those devastating losses at the College World Series, Clemson actually won 10 of the next 16 games against South Carolina.

The real issue started after the 2006 campaign. Since 2007 Clemson is just 8-23 against South Carolina. From 1986 until 2006 Clemson lost the season series with South Carolina just twice. Clemson has not won the season series with the Gamecocks since 2006. In that stretch Clemson has been held to three runs or less in 17 of the 31 games. Meanwhile the Tigers have held the Gamecocks to three runs or less in six of the last 31 games.

Clemson still holds the series lead 170-134-2, but its time to get the series back in order.

Clemson baseball can be divided into three seasons. The postseason with the ACC tournament, NCAA regionals, super regionals and the College World Series is a separate season. I think the ACC season is a season within itself. The third part of the season is the series against South Carolina. The results against South Carolina greatly affects the feeling around the baseball program. This weekend series will say a lot about the attitude of the fan base concerning the Clemson program.

It's time to feel good about Clemson baseball again.