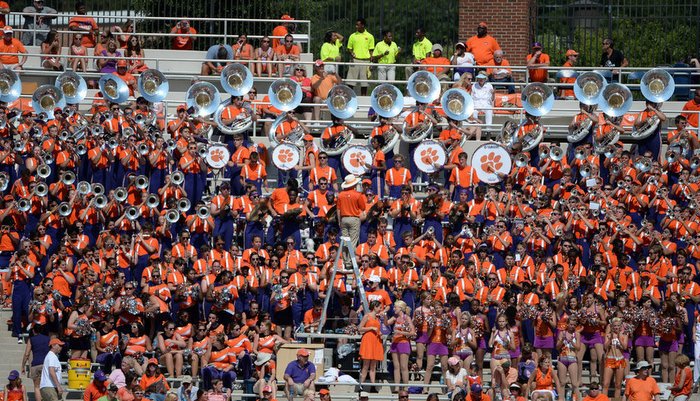 Dan Radakovich
Director of Athletics
View Full Profile wisely put in place a fan advisory committee a couple of years ago to help the athletic department improve the game day experience at Clemson. The Solid Orange Fan Advisory (SOFA) Board as been hard at work and later today, Clemson will release their "15 for 15" improvements for Memorial Stadium.

I like knowing that Clemson is listening to its fans, and the fans have a voice.

I am a stat guy, but stats have been almost non-existent in Death Valley. There is no permanent statistic section of the scoreboard like you see at Florida State or Florida. In Doak Campbell, they have running team totals for each team's rushing, passing and total yards. The stats are updated after every play.

Clemson has done more statistics on their ribbon boards in recent years, but the stats are often wrong and are not current. It would be nice to know that Deshaun Watson

Deshaun Watson
So. Quarterback
#4 6-2, 205
Gainesville, GA
View Full Profile is 12 of 15 for 152 yards with two touchdowns and no interceptions.

This seems to be a no-brainer, but for some reason at Clemson this seems hard. If we could put a man on the moon, it seems like we could get a updated scores. Often games will be in the fourth quarter but the boards at the stadium may still say halftime. Sometimes the game times are wrong.

Every year I keep hearing about how the cell coverage is going to be better. I have yet to see it. I even switched companies last year, and it was even worse even though we were told it would be better. If you are in Death Valley, you would have an easier time getting the right call from Ron Cherry instead of receiving a phone call on your cell phone.

Last year I enjoyed one of unique experiences I have been a part of in Death Valley. Clemson's game had just ended, and the band was playing the alma mater. The video board switched over to the South Carolina-Missouri game and the 20,000 fans still left in Death Valley had a chance to watch the Tigers finish off the upset of South Carolina. It was a pretty electric atmosphere and one I wish we could see more.

I think it would be great if we got a chance to see highlights of top games or upsets during timeouts or at halftime.

It seems like every time out the school president or athletic director have to go out into the west end zone for another check presentation or to give another award. I know these people often want their time in the limelight, but I wish there were bigger minimums for the check presentations. It seems like the presentations get watered down due to the frequency each week.

I love the hype video they show of the off-season conditioning program at the start of the fourth quarter. It would suit me to have more hype videos during time outs.

I love videos of former Tiger greats, or great Clemson wins. It never gets old to go back and revisit some of the best moments in school history.

Some of the videos are buzz kill. I know everyone wants their cause or their department to be recognized, but timeouts get boring with some of the non-football videos. I think we need to remember this is a football game.