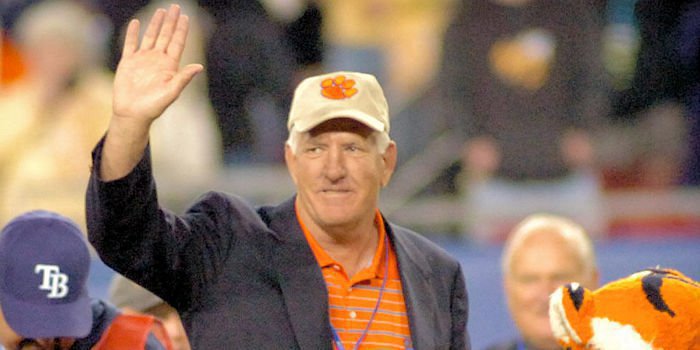 I was living but not plugged into college football during the Danny Ford years.  It is interesting that they have basically the same record.  It is obvious the older Clemson folks love Ford and I guess do too but never saw any of it first hand.  I would be curious as to what your thoughts are comparing them, just sort of the general vibe around the program.  It would be interesting to see an article written from someone that knows both well – just a compare and contrast type article.  I can’t help but think it would be tough to think of anyone topping Dabo.  And my gut says we are somehow still trending upward, even after last year.

Thanks for the great email. I am a huge Danny Ford fan. There were a lot of similarities and a few differences between Dabo and Coach Ford. Both are thought of as great recruiters. Both deeply cared about their players. Both hired great assistant coaches and let them coach.

Dabo is different in has offensive philosophy. Coach Ford wouldn’t throw it 40 times a game even if you counted the pre-game warm up.

Perhaps the main difference is the synergy on campus that a Dabo enjoys. The administration often had an adversarial relationship with Coach Ford. Coach Ford was told no many more times than Dabo has been told no.Friday Email Bag

In summary, both are great coaches who got their start at young age. These are the two best coaches in school history. Two very interesting men who have that rare trait of having presence every time they walk into a room.

First of all thanks for all you do for us Clemson fans and the public in general. It sure is nice getting my sports news about Clemson from you.  Here In enemy territory it’s scarce, the local media knows of only one school.  Enough said about that.

My question is a weird one, and somewhat off the wall.  Given how Dabo hates Friday games, as most Clemson fans do, curious what would happen if Clemson balked at playing them?  Saying that we won’t play on Friday, again until we see the likes of Alabama, Ohio State, Southern Cal, Norte Dame, play on Friday.  I know TV and ESPN run the show, but am curious what would Swoffy and ACC do, and ESPN if we made such a request/demand?

Clemson and the ACC accept money from the television networks who dictate the times and dates of games. The big conferences have these huge contracts and they depend on this money. I don’t like it either, but the universities take the money and have no say as a result. The contracts are negotiated with the schools getting money but little say on the schedule.

Work has had me in the car a lot in the last couple of weeks with the opportunity to listen to all the talk radio guys talk football.  It is a rare place our Tigers have achieved where our fans complain, not about winning, but about winning by enough margin.  Dabo and staff do a great job of playing a bunch of guys.  These guys that are our stars now, were back-ups a year ago.  Our juniors have played 30 games before their junior year and many of them played significant snaps in competitive situations.  It proves that winning now and winning long term are not mutually exclusive.  We are not just "next man up", we are "next man is ready to step up."  That is the biggest difference.

You are around the program and see what we don't see.  Do you see a change in Dabo?  I perceive a difference in his press conferences and his interviews.  He has always been the fun guy, full of energy, a real kid himself.  Now, he seems more controlled, more CEO and less cheerleader.  More Saban and less, well, Dabo.  Is it just to the press, or is this a change in his demeanor?  Part of what makes him the best recruiter in sports is that enthusiasm.  I like the controlled answers of a confident coach that has been there and done that, but I like the BYOG guy, too.  That wide eyed enthusiasm reminds me that college football is not life and death.  It is a game played by 18-22 year old boys that love to play.

There is a fine line between maturity and enthusiasm. I agree that Dabo appears to be a little more serious as he ages, but I think that is a natural maturity process. He still has fun and still is enthusiastic, but his experience has led him to a little more mature demeanor. I am more serious at 49 than I was at 39.

I despise the term "trap game" but the game at the Cuse Friday is a very dangerous game.  Kelly Bryant may not play and by looking at their results this year, Syracuse is not team at all.  Based on the Coaches' Poll, the last 6 games will pit the Tigers against 3 teams in the Top 41 and that does not include Florida State.  As Dabo will surely say, nothing has been won yet.

For me, the toughest game of the year will be in Raleigh against an NC State that just looks the part and that is a tough place to play where the game will hopefully be an afternoon game.  I would like to hear your rankings of opponents and am sure you will not agree but at this point, I think Florida State and South Carolina and the next toughest games and then Ga. Tech.  Florida State looked very good at times against The U and has probably never had a recruiting class not in the Top 10.  South Carolina has a tough schedule the last half of the year and as they get more players healthy, they will be ready at Williams Brice where their fans are brutal and desperate to stop the beat downs by Clemson.  Georgia Tech is very good but because Clemson has the beef to stop the inside run, the defense and done well against Tech.

It seems like light years ago that we celebrated getting a 6th win and becoming Bowl eligible but let's remember the season is only half over and there is much more work to do.

I expect Bryant to play tonight, but I also expect a fairly close game. This is an improved program who is growing under Dino Babers.

I would rank the remaining games in terms of difficulty as follows:

If Kelly Bryant's ankle injury is severe enough to keep him from playing(which I hope it isn't), do you think the coaches will rely more on the understanding of a system than the execution of a system. Being at the game Saturday, it was readily apparent that Hunter Johnson was a far superior talent at executing the pass plays. I don't know how well Johnson can run because with his perfect passing, he never had to run. The Cooper-Johnson matchup reminded me of the Stoudt-Watson matchup at Georgia four years ago. Even with Watson's perfect performance there, the coaches could not get bring themselves to give the nod to him. Are we facing a similar situation? I look forward to your response.

First, I think Bryant will play. The back up position is constantly being evaluated and I think Hunter is coming on and gaining on a Zerrick. I would not be surprised to see him move ahead of Cooper soon. However, I don’t think this is similar to the previous situation. These are new coordinators and a new quarterback coach. Also I think Dabo learned from that experience.

As a 1972 Graduate, I am so proud of what Dabo and the administration have done with our football program as well as all other athletic programs. I am so afraid that a lot of Clemson fans are becoming spoiled, and when, not if, we lose, the Boo Birds will emerge in vengeance. I guess I’m old enough and mature enough that I will be able to accept that someone will beat us. My hope is that the majority of our fan base will not blast Dabo and the players for losing some games. While a student at Clemson, we lost a ton of games, but we went to every home game and when able, went to away games. To this day, when I walk on campus I get a great feeling, because I have all ways felt that Clemson is a unique place. I honestly feel that Dabo saw Clemson as I see it long before he became head coach , and he set out determine to sell Clemson to any recruit he felt would represent Clemson well. Dabo has put Clemson on the map in such a positive way that recruits want to see for themselves what Clemson is all about.

Unless someone in the athletic dept. really fouls up, we (CLEMSON ) for the first time ever, have a self sustaining football program that the entire nation can’t believe.

Thanks for your blogs.

I heard a few boos against Boston College but my guess would be a few hundred out of 80,000. That is not a significant number. I think most Clemson people realize how rare this successful stint is and how difficult it is to maintain. With that said, the board, the president, the athletic director and the fans have seen what it takes to win at this level and I don’t anticipate the program going too far back any time soon.