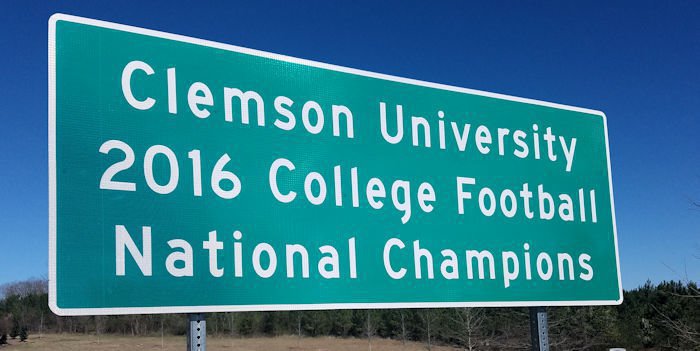 A rivalry is in the eye of the beholder. South Carolina is by far our rival based on history and proximity. You see arrogant South Carolina fans on a daily basis. Just because their program is not up to Clemson's level right now, there is nothing like beating them in sports and putting them in their place. They are so proud of being second class citizens in the SEC.

If Florida State had not passed on the SEC, South Carolina would be playing in Conference USA or the American Athletic Conference with about a 500 record. I wonder if the average South Carolina fan even realizes they were not the first choice of the SEC.

As far as the South Carolina game this past season, I thoroughly enjoyed it. I wish Watson had of stayed in the game, and Clemson would have scored 100 points. I want to humiliate South Carolina in football and all sports. And believe me, they want to do the same to Clemson

P.S. Do you think South Carolina has ever sent a thank you note to Florida State for turning down the SEC? They probably have not, but they should send one weekly.

So do you like South Carolina or not? Just kidding. I agree with you in thinking that South Carolina always has been our rival and a lot would have to change for that to not be the case. But, never say never.

Can you find out when the 2016 National championship football team is going to visit the White House? Thank you.

I have not heard any dates. Maybe one of our readers can help us both out.

I know T. Boone Pickens gave OST $120m in the first gift when Terry Don Phillips was their AD, but I think he also gave a second give of over $100m a few years later. Where did all of the money go? Plus OSU has many oil millionaires supporting the university. Sounds like poor money management.

I think Gundy is the perfect example of "sour grapes". It all depends on the set of goggles you are looking through. When Oklahoma State was a "have", he was not complaining. Now, that they are a "have not", he voices a different opinion. All I can say is that it is nice Clemson is a "have" program now.