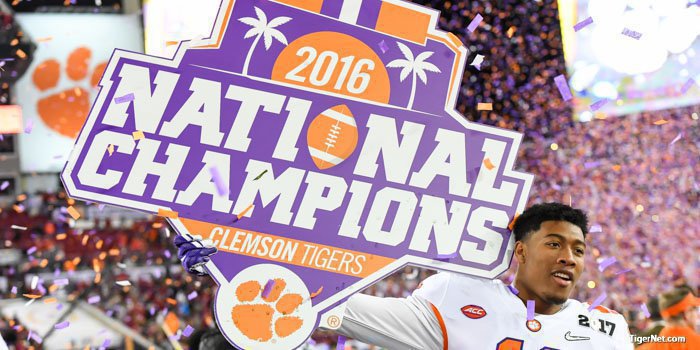 As I reflect on Monday, one thing resonates with me. We have been practicing all season long for that last 2 minutes. It seems each game we had an opportunity to score at the half or win the close game. When it was on the line, the team was poised, calm and ready. They knew they could score and the confidence gave them what was needed for a series of that magnitude. You could see the compilation of an entire season in one game. It had everything from the critical stop, to the ugly turnovers, to the dynamic plays, to the 2 minute drill. The only thing missing was the overtime win, which might have put me in the grave if we had gotten to that point. As Dabo says, God doesn’t say OOPs – he was preparing us for the biggest game of the season. Clemson Tigers – welcome to the club and another chapter in the Dabo Dynasty!

Great point about the 2-minute offense this year. I spoke with an Alabama coach Thursday and he was very impressed with the play calls and execution of the last drive. They were prepared and did what they had to do. What a time to be a Tiger!

Game notwithstanding, which was the best game winning drive:

The LSU drive was amazing because it featured a 4th and 16. But this one ended up with a touchdown instead of a field goal. It's hard to compare, but the national title result just can't be taken out of the equation.

Mickey, A couple of Xs and Os from Monday night fourth quarter. 1) The first score of the quarter (fade to Williams) Leggett is supposedly running a "pick". He had his back to the defenders-they ran into him. Sure he poked his rear end out like someone going low post in basketball but they ran into him. 2)The pass interference call was spot on- the amazing thing was,the Ala. DB had no idea what the coverage was. He had help over the top and should have had no worries about the fad. He initially did his job but panicked as Williams got by him- no trust in his teammate and poor coaching.3)The TD to Renfrow again has been declared a "pick" by some but the Ala. DB basically tackled the outside receiver from Clemson (defensive holding not called) and that created the pile of obstruction. Secondly Renfrow almost broke the Ala. DB's ankles with his pattern and lastly- evidently Ala. has never heard of a "switch" call when playing man on the goal line. That is poor coaching. Thanks for listening.

Great points. The last play featured pass inference or at least defensive holding on the outside DB. He just tackled Scott. Of course, that was probably smart and would have been the thing to do with Renfrow if they could have gotten to him.

I’ve got a couple of questions for you: I’m still kind of surprised over the Tigers situation with Cordarrian Richardson, the RB from TN. I understand things were out of whack with the school leadership but usually Dabo and company have a pretty good handle on a kid’s background a month before NSD. I feel like the Tigers need another RB and a guy that can run between the tackles as Gallman and Fuller (more recently) have shown. Current Target Darrien Felix looks to be a bit of scat back to me...fast, quick and gifted no doubt…but not a bruiser. What’s your take?

Also, Artavis Scott has been an outstanding football player for the Tigers—outstanding! However, wouldn’t another year possibly allow him to highlight his skills and improve what looks like a late round pick at this point? Mike Williams took all the spotlight this season.

Austin Bryant seemed to have slipped under the radar this year a bit, but the Ferrell cat took a giant leap forward against Ohio State? Any thoughts on the DE play this year? (I’m not being critical of them at all. They did’t grander the attention like Lawson, Beasley, Goodman, Branch etc)

Finally, who will be the QB of the Defense now that Boulware heads to the NFL?

They had no way to know on Richardson. The transcripts are all they have to go on. No one knew. Felix is going to Oregon. Clemson will find a back.

Scott couldn't really improve his draft stock plus he graduated.

I thought the DEs played outstanding all year and will be a big strength next year. I thought Wilkins and Ferrell were fantastic. Bryant missed the first half of the season, but this unit played well.

Wilkins will be the emotional leader, but Joseph, Lamar, O'Daniel will have to lead at linebacker.

According to Chattanooga Times Sports Writer Jay Greeson, Clemson only has two football players that could start for Alabama. See the article below. Sorry that you have wasted a trip to Tampa. Looks like we are completely outclassed.

If that is the case, then Clemson has great coaches, or Alabama has bad ones. Clemson had 75 points, over 1,000 yards and 62 first downs the past two years against them.

I will never forget the joy that my wife shared with thousands of Clemson fans in Miami when Clemson won its first National Championship. We were not able to be in Tampa for the game but I will also never forgot the tears of joy we shed after Hunter Renfrow caught the National Championship winning pass last night. The hard work and dedication paid off for the young men of the team and they will forever be heroes to Tiger fans but they could not have done it without their coaches and staff.

Dabo said last year that it would not be 35 years before Clemson was back in the Championship game and he was certainly right. If Clemson will ever make a return Championship trip will only be known as time passes but there is one thing that needs to be done as soon as possible and that is to pay Dabo what he is worth. Money magazine has Dabo listed as the12th highest paid coach in the country and that is just flat out wrong. I know that Dabo has made it clear in past years when he took money away from his raise to help pay his assistants and his assistants are second to none but he deserves to be paid on a scale of what he does for Clemson University. No, I do not say that Dabo should be paid what Saban, Harbaugh or some of the other long-term coaches at much larger schools make but is he really worth only the 12th highest salary? Dabo may not need or demand to earn much more, but hopefully, Clemson will show him what he means to the school and program.

Dabo got a $1.4 million dollar bonus for the post season. He will be rewarded. Money won't be the issue. Clemson rarely tells Dabo no. They have invested in him, his assistants, his facilities, and his program.