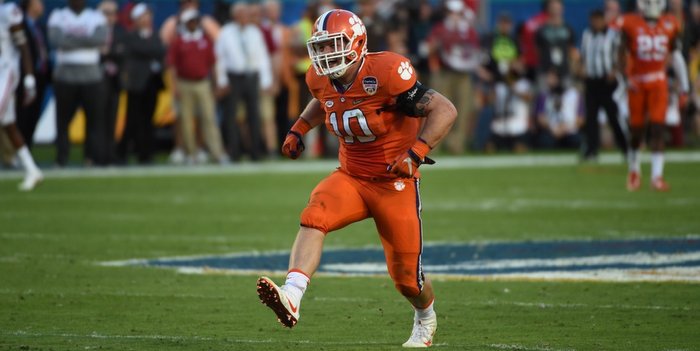 Intriguing article on the defense.

My expectations were greatly exceeded last year by the play of Kevin Dodd. I had zero for expectations for him, Goodsen and Greene. Until the fourth quarter of the Notre Dame game I was ecstatic with the unit’s play.

As the season progressed, the defensive backfield play regressed. Eyes were lost in the backfield and lots of big plays resulted. Giving us:

The Bad, multiple huge plays with the safeties out of position and looking the wrong way.

If and it is a big IF, this year’s group plays as a unit and not as individual talented athletes, the Tigers could have a better defense even though the stats might not dominate. Both Good and Bad.

The talent filling in is as good as it has been. The coaching with depth has gotten better.

September 3rd, we will find out whether we have Defensive talent (and a lot of it) doing their thing or a unit committed to excellence.

Thanks for the insightful email. I agree with many of your points. I do look forward to the defense being more fundamentally sound, especially in the secondary. I think we will see Brent Venables play his safeties a lot higher in coverage instead of playing so close to the line of scrimmage. As you stated, there is give and take in that aggressive plan.

The only thing that truly worries me is the inexperience. Van Smith has never started a game. How will he react in his first road game? Will Mark Fields bust any coverages? Will Auburn be able to hit big plays by exploiting the defensive ends with jet sweeps?

In the end, this defense has a high ceiling, but early in the season the lack of experience is a factor.

Since OrTre Smith is likely committing to South Carolina on September 11, do we see anyone that might commit to Clemson in the horizon for this fall?

The staff is so limited in scholarships that they have to be very selective.

Parks is a five star defensive end that is just now heating his recruiting up. He has taken few visits and Clemson is one of the schools that is fighting to get a longer look.

Herring will go to Georgia, but Clemson is still in his ear.

Singleton has Clemson and Michigan as his top two, but is not close to making a decision.

Bell won't visit until November and is no where close to making a decision.

Okudah will visit later this season as well and appears to be in no rush.

The only two players that I think could make a decision during the season might be McKinney and Foster. I think Clemson is in great shape with both of these top 100 prospects, but there is still work to be done on both.

Hope that answers your question.

Mickey: I agree with virtually all of your assessment but would emphasize 2 things. Looked at over the entire season, IMO ,our safety play was far less than stellar. Far too many times our safeties were caught playing up to stop the run and not playing what the position of

"safety" implies by its name. I expect a dramatic improvement in that area this year.

Second, we turned the opponents over far too many times last year. I also expect that number to be dramatically improved in 2016.

Finally, if our special teams improve to an acceptable level this year, we will win the NC--barring any injury to number 4. Our O should be something to see!!!

I agree with you. Greene and Kearse were linebacker bodies playing close to the line of scrimmage and this year's group looks more like conventional safeties.

I do know that turnovers have been a big emphasis since last season. As good as this offense was, the turnovers need to improve.

Like you, I have high expectations. They have worked their butt off on special teams. And yeah, if Watson stays healthy, it could be another special season.