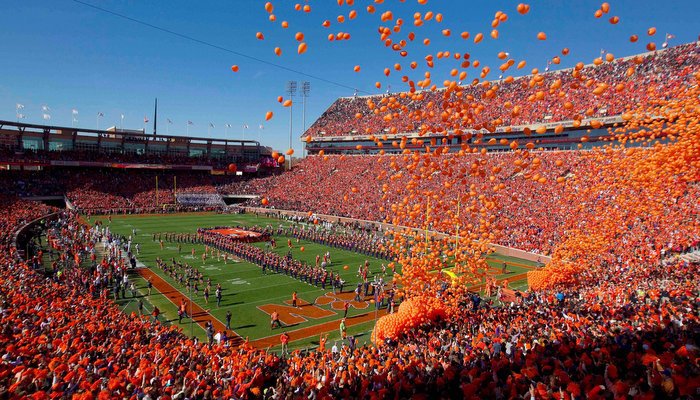 Thanks for clearing up the activity fee. According to you the athletic department gets zero out of this fee.

I heard the interview with the student ( I thought he may have been the Student Body President) on WCCP (one of the shows when this thing came up).

I thought he said that a % of the activity fee went to the athletic department. In his defense, I could be wrong in my recollection of what he said.

The only thing I recall that the activity fee did for us in the old days was for Fike and the privilege of getting in the mix for tickets (in other words camping out or standing in line for basketball and football tickets in hopes to get one of the few allotted at the time).

So in my view the athletic department should have been getting a cut of the activity fee. I am surprised to learn that they did not and do not.

Thanks again for clearing this up,

Thanks for the email. Currently, the athletic department doesn't make anything off of any student fees. To me, it is a good compromise. Nothing is mandatory. All other sports are free, and there is still free seating in the upper deck.

I don't blame students who were are upset. It is hard at first to charge someone for something they have been getting for free.

However, I haven't heard them raise hell at the outrageous tuition hikes or fee increases in the past. Students currently pay over $1,200 in fees already. What about the matriculation fee?

You have to pay to use Fike and Redfern, why not football?

Enjoy each of your articles on TigerNet every week.

Your article on the Gap piqued me interest in metrics that matter.

Clearly revenue matters a lot, but like most companies, organizations, and governments there are a series of metrics that indicate the vitality and sustainability of the enterprise beyond the top line number.

My sense is if Clemson could spend what Texas and Texas A&M spend we would not be Clemson. The cool would be gone. The old Big 8 schools are awash in petrodollars and rabid grads from their engineering department and the sheer size of the school’s alumni base, and diversified state budget.

It would be fun to have Tim Bourrett (sp) the stats guy for football, look at the persistence of IPTAY donor’s and the increase over time of their donations.

How does the athletic department discount the future value of televised sports. A&M left the Big 8 because Texas had the Longhorn Network (much like Notre Dame with NBC). A&M playing Texas meant they were merely funding the Longhorns coffers at their own expense. More money is wasted in Texas than you can imagine while, Baylor and TCU play really good football.

Clemson has always been insecure about revenue and athletics. Our charter does not allow us to produce doctors and lawyers that inherently direct large sums back to their alma mater’s athletic programs. We are not likely to see the boost in revenue from the tickets, concessions and merchandise that goes along with 20K of additionally bodies in the stands for home games like those we envy. It will be long time coming for physical expansion if ever.

Yea more revenue, but I like the fact we are hungry and insecure not fat and bloated like many of the top 10.

I think Thad Turnipseed may know what the metrics are that matter for spending where it will make a difference now and over time. I hope you will have the conversation with him and fill in the gap.

Thanks again for the thoughtful articles.

This thing is pretty simple to me. Investing in your brand is smart. I think as time goes on, we will see the importance of that even more.

TCU has a great coach, but do you think TCU will stay where they are for ten more years? I don't. It's pretty clear to me that Baylor runs a sketchy program. I do think A&M and Texas will be back soon.

Thanks again for your email. You make good points about the state of Texas.