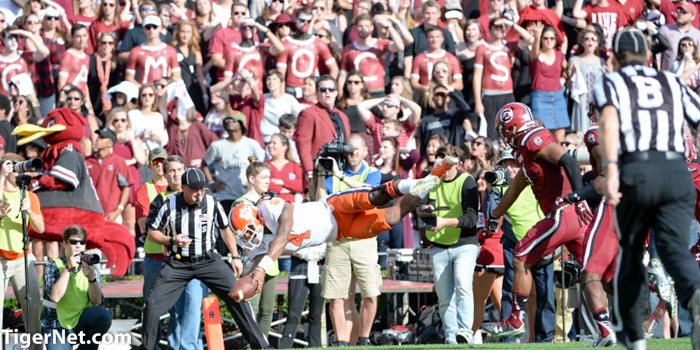 The really interesting "jersey story" is what will happen down the road with #4? As we all know, #4 belongs to Steve Fuller who gave his blessing for MR. WATSON to wear the number and wow how he has he worn it. What will happen when Watson is gone? Will he be in the Ring of Honor? Will #4 be retired a second time or how in the world could you do that? Time will tell but the results will be interesting and probably ruffle some feathers along the way but what a great problem it is.

I would like to see the tradition continue. I would love to see Hunter Johnson wear the number and wear a Fuller/Watson patch. To me, you can use it in recruiting quarterbacks. I think schools should retire jerseys but not numbers.

You expressed to point well. Local merchants are missing the opportunity to sell based on a stars number, likeness etc. As well as the school.

I had the same situation this way. I bought a boat which I had customized a certain way which looked very cool. I was asked by the dealer who didn’t do the customization, pay or design it ask if he could take a picture of me speeding by. I assumed it would be for him putting up in the office. I then drive a two week expedition from Fairbanks down the China river, Tanana river and Yukon. Across the Norton sound. It was a fun adventure.

When I get home I am surprised to see that a half page ad of my son and I clearly in the boat in the “Bush Mailer” an ad paper. We went by and stopped at twenty villages that the dealer serviced.

Football is a labor of love for a lot of us. But it is a labor. The NCAA more or less is the labor control board by controlling contact hours by coaches and practice time. So looking at your statement again on the merchants losing out on a sale, in light of where the labor for that worth comes. I feel that compensation is due.

As afar as asking an active player, that’s a little unfair.

In my opinion, we are still talking about amateur athletics. These players get tuition, room, board, medical, vision, and dental. All of their medical expenses are covered. Their surgeries and rehabs are covered. They access to professional conditioning and nutritionists. They get free tutors. Student-athletes work their butts off, but they are still amateurs who are training for their jobs after college.

I wish you would do a blog on these newly hired HS coaches. I don't understand any of this except it was something Dabo wanted to do. Perhaps, another example of too many bux sloshing around in the program.

The model that Nick Saban put in place is to have a bunch of cooks in the kitchen. The support staffs continue to grow. Clemson hired two very good football people this week. They will be valuable additions.

Mickey -- Is Terry Allen working with the Tigers RBs again this spring and/or this season? He seemed to work wonders with an already talented Wayne Gallman last year.

Correct me if I'm wrong, but didn't basketball get more attendance at the well this year than at littlejohn in 2014-15 ? If more people went to basketball games in Greenville, doesn't that kind of show that a new arena in Clemson is somewhat of a wasted opportunity to spend money on something else? I mean, the new arena could get lots and lots of people to show up, don't get me wrong, but there is always the possibility of having wasted money. I don't know, maybe I'm just some guy making stupid theories of "what if" this, and "what if" that. What do you think?

They drew pretty well in Greenville, but can't play in Greenville every year. I wouldn't mind seeing the Tigers play there once a year. Also, I am not sure a new coliseum was needed. I would have done a facelift and build a world class practice facility and coaches offices.

Good job as always. I always look forward to what you have to say about our Tigers. Ive re-watched the Bama game 7 or 8 times now. No, im not a glutton for punishment, but rather still mesmerized by Deshaun Watson's performance against that Defense (boy they were big and fast, weren't they)? A performance that, since this was the last game of the College Football season, will hopefully be revisited and discussed by the media once the CFB chatter picks up again this summer. Do you think DW4’s play against “the best defense in years” could factor into 2016 Heisman voting? The Postseason is now multiple games extending an entire month after the Heisman is awarded each December. Heisman winners/finalists are almost always draft-eligible and take advantage of their great year to do just that- leave school for the NFL. Coincidently, their performances in the “postseason” are frequently unimpressive. If Watson (and Mccaffrey) continue their high level of play in September, could it give them a leg up?

I still haven't watched it. I just can't bring myself to it. I have it DVRed but can't pull the trigger yet.

Yes, I think the game will play a factor in the 2016 Heisman voting because he enters the season as the favorite. You still have to win it on the field, but he will be the most watched player in the country next season.