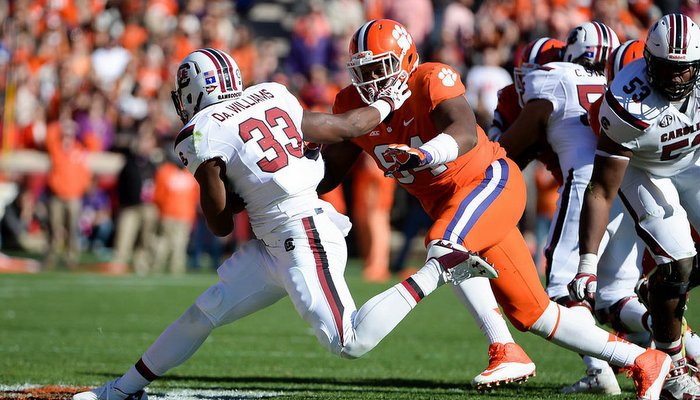 I was reading the article about Jay Guillermo growing up a Clemson fan and he could never be a Gamecock. I grew up a Gamecock, as that is my family’s heritage, but my best friend told me I was going to Clemson my senior year in high school. I laughed it off until I got accepted and he said we are going to be roommates. My first two weeks on campus had me second guessing my decision until my first game against Wofford in 1981. I watched them run down the hill and in 25 seconds my blood forever changed from red to orange. My dad, a huge gamecock fan, and I talked after each CU/USC game to claim bragging rights for that year. I remember one year when I was home for Thanksgiving and the game was in Clemson. I had a ticket for the game, but decided to watch it with my dad. USC won. He died less than a year later. He was the winner, but looking back on it, we both won that day. Rivalries are the passion, but the memories are what make it great. That memory will be my fondest.

Thanks for the email. I think most of us that grew up in this state have family members on both sides of the rivalry. I used to like the game when it was played before Thanksgiving because that meant bragging rights at the dinner table. I grew up in Irmo and it was pretty easy being a Clemson fan in the midlands for many of my formative years. I joke that I grew up about as far away from college football as you could get. Happy Thanksgiving.

The rise and fall of the program in Columbia seems to follow a simple pattern. Spurrier probably owns his success from 2011-2013 to the resignation of Tommy Bowden at Clemson. Even though Bowden lacked the ability to win the big ones, he was an very good at recruiting and beating the Gamecocks. When he resigned and little known Dabo Swinney was named head coach, many elite SC recruits leaning toward Clemson turned to other schools, mainly the Gamecocks. SC pretty much sweep the top players in the state the next 3 years (2009-2011) with Gilmore, Cann, Jeffery, Lattimore, Clowney, Sanders, Quarles,and Shell to name a few. Dabo then began to turn the program around at Clemson and recruits began to flow back to the Tigers once more. The dandy dozen with Tajh Boyd was the beginning in 2009 followed by outstanding classes.The results are showing today. Spurrier was smart enough to see the writing on the wall so he cut and ran.

I think you hit the nail on the head. I think it is clear that Spurrier and South Carolina fell asleep at the wheel. Also it is clear that the state stopped putting out five stars like it did for a three or four year stretch and the Gamecocks could not cast their recruiting net wide enough to make up the difference.

I have read several places about how our players are treated when we play at WB and it is deplorable. How does our administration allow this? Much more why does their administration allow it. I am aware of the fact that this is a rivalry game, I grew up in Clemson but to throw urine on players is an embarrassment to their team, one would think. I guess not for Carolina fans. I hope our officials are doing something so this is not repeated! Go Tigers!

I am not sure what can be done. They are not going to cancel the series but Clemson is not in charge of security at road games. I agree that no one should have to endure dangerous or unsanitary conditions, but I am not sure what the road team can do.

I hope everyone had a wonderful Thanksgiving. If you think back a year, very few people had any idea that Deshaun Watson had a torn ACL but what we did know by the end of the 1st quarter was the Clemson offensive line turned a page and were totally dominant. The primary reason that South Carolina was on an unprecedented winning streak against Clemson was until last year, they were the dominant physical team. I know that Coach Swinney and his assistants have preached all week that the South Carolina team that has lost 8 games this year will not be the same team that we will see this Saturday. Hopefully the Clemson players will believe the coaches, because not since the National Championship year has there been a year the Gamecocks want to win as badly as they do this year. Physical talks and BS walks so if the Tigers are not 100% ready, I fear the war will be lost and be certain it will be a war like none other this year.

I think Clemson was the most physical team the last two years, but turnovers were the difference two years ago. I think it is clear through 11 games for each that Clemson is better along both lines of scrimmage and I would be very surprised if that doesn't show Saturday. South Carolina has struggled on both lines of scrimmage this season. I think we will see that Saturday.