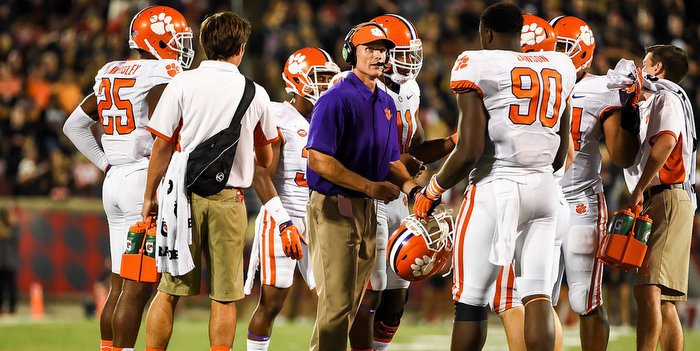 Coach Venables is a great defensive mind and we are so fortunately to have him. The only exposure we really get of him is what we see in interviews and on the field. I fear it will not be much longer before someone comes knocking on his door, if they already haven’t. We always knew it was only a matter of time before Chad left, so I would like to get your perspective on where he is in terms of being ready for a head coaching position. If someone did and it was the right fit, would Dabo promote from within or go outside?

He was asked about it again this week, and Venables says if he ever took a head coaching job it would have to be a great one. He mentioned that he would only leave to take a very good job where you can win. He said he loves Clemson and loves what he is doing. Personally I think he will get a chance fairly soon, but I am not sure when. Dabo has the luxury of having several options on staff, but the budget to go out and get a big-time coordinator if he chose that route. Also, it is a great job because of the talent that is here and it is a great place to work.

Without disrespect to our offense, I believe that Clemson won’t be able to run on BC (nobody can). That said, if Clemson’s offense turns it over on their own side of the field even once, it could be catastrophic. I can’t expect anyone to get more than 2 touchdowns against a defense like this.

It very well could be a game of which defense can engineer the most turnovers. I certainly don’t like it that Adazzio is being so complimentary to Clemson in public. BC is the one being disrespected right now. This game has me concerned.

I am not sure Clemson can line up and run it right at Boston College, but I think the Tigers could use the passing game to open up the running opportunities. My guess is that Boston College will have a hard time moving the ball, and Clemson will be able to take advantage of some good field position. I also expect Clemson to be able to exploit some athletic advantages on the perimeter and in the passing game. I am less worried about this one than I am the next two weeks on the road. I think Miami and NC State on the road will be a bigger test than BC in Death Valley.

Will we see any of Tyshon Dye

I hope so, but it is hard for Dye at this point. Wayne Gallman

Wayne Gallman
RS So. Running Back
#9 6-1, 210
Loganville, GA
View Full Profile is obviously the top back and a guy that handles most of the carries. It looks like Zac Brooks

Zac Brooks
Running Back (2012 - 2015)
#24 6-0, 200
Jonesboro, AR
View Full Profile has taken the number two job right now. So playing time is limited and it is hard to get in a rhythm with so few carries. Dye has struggled with injuries and confidence but is a great kid and an easy guy to pull for. I hope he can make a move up the depth chart soon.