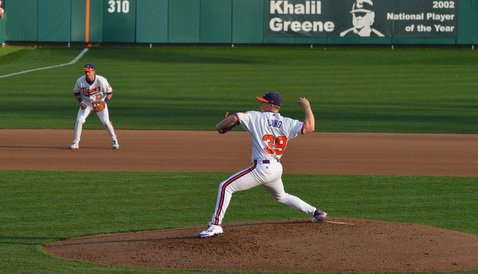 With the sweep at FSU and today's win over Louisville are the Tigers on the inside or outside in terms of the NCAA regionals? Thanks and keep up the good work.

Check back with me around seven o'clock on Friday. Just Kidding. The real answer is I am not sure. If Clemson beats UNC Friday then they have finished strong. A 2-1 ACC tournament would be a statement to the committee. If they lose to the Tar Heels and finish 1-2 in the conference tournament it would not be as clearly defined. I hate to say it, but maybe the game against the Tar Heels is the play-in game for Clemson and the NCAA tournament. The good news is that bubble teams like Georgia Tech and Missouri have not played well in the last week or so.

I heard the other day that players do not technically have to sign a letter of intent to play at a school on signing day.  This gives them the latitude to change their mind before they enroll the school.  I believe once they enroll, the process is truly over at that point.  With the number of coaching changes it really doesn’t surprise me that a player, especially a 4 or 5 star, would do something like this.  What will be interesting to watch is to see if this is a trend we start to see with the higher profile players and how will the schools react to that.  Who really has the power here?  School wants the player, so do they allow this or does the school tell the player, we want you, but if you are unwilling to sign, then we may fill the spot with someone else.   Who blinks first?

Few players can afford to drag programs along. I would guess only a handful of five stars. The coaches just won't put up with it. There are so many plans that have to made about numbers that the system won't allow it. Plus the calendar is so full of recruiting, they will move on to the next class. I think we are talking about a very small number of players.

How can the #2 RB in the nation as ranked by rivals.com, scout.com and ESPN.com only be a 4 star?

Those services feel like there is only one five star running back at this point. I do think at some time Feaster will be considered for a fifth star. He will have to have a big senior season but he is capable.