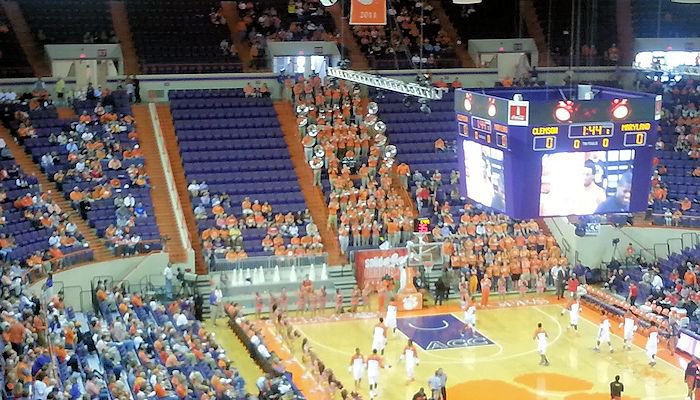 The performance of both the baseball team and the basketball team over the last 9 days has been frustrating to say the least. I really don't see any signs things will get better soon. At what point do we need to think of cutting our losses and looking for new leadership?

Hope you and Ryan get a chance to watch some MLB this summer.

Brad Brownell
Head Coach
View Full Profile this season. They have invested in him and believe in him. Baseball is too early to tell. This team still has 41 regular season games left. We will judge this team a little later in the season.

Let me first say that I did not have the chance to watch the ACC Tournament game against Florida State but the write-up told me if was similar to many other games in the past couple of years and the result was not good for Clemson.   Any business, organization, athletic department or even you or I sit down at some point and look at where things are compared to where they should be which leads me to a huge question about the basketball program at Clemson.   The question I have is does the university and athletic department care whether Clemson wins men's basketball games or not?

Clemson, as a member of the ACC, receives a huge check each year for being part of the conference and the writers of that check do not look at the number of wins before the check is written.    Does anyone at Clemson look at records in basketball or really, does it really matter?    I find it really hard to believe that a return on the investment in a new Littlejohn will be positive as long as Brad Brownell is the coach.    Without a doubt, Brad Brownell can coach and would be and has been a successful mid-major coach but can he, or any other coach bring enough talented recruits to Clemson in order for the team to be relevant in the ACC?    My hope when Coach Brownell was hired was that because of his past experience he could bring in some talented players from the Kentucky, Tennessee, Indiana area that would be able to change the level of play at Clemson but that did not happen.    Watch games in the Big Dance and listen for where many of the players are from and you will be surprised how many are from those states.

You have stated many times that you like Coach Brownell and I appreciate that as well as the fact that maybe he is a sacrificial lamb while Littlejohn is being rebuilt.   When Clemson spends over $60 million on a new arena, does the expectation of winning come with the price or does the athletic department just continue thanking Duke, Virginia, Louisville, Notre Dame, North Carolina and the other big time teams for the check it cashes?      As you said in your column, the time is coming to fish or cut bait.

I think the administration wants to win, but are they willing to do what it takes. The plans for Littlejohn continue to change. They are still cutting costs. I wonder how much has been cut from the original plans. I think this all goes back to the Frank Howard days. When he was the AD they really didn't invest in basketball. Press Maravich left as the head coach at Clemson to be an assistant at NC State. When Tates Locke got here to become the head coach he said they had three basketballs. We have rarely invested therefore we are playing catchup. We keep putting bandaids on the program. Will we ever fully invest? Is it worth or time to do so? A $60 million Littlejohn is nice but where will that put us in terms of the competition? My guess is that Louisville, Syracuse, North Carolina and Duke will still invest more.

I read an article about the playoff system and how it will remain as is for the time being.  I completely agree with leaving it at 4 teams and hope it never changes, although it will at some point.  The intriguing question is, will conferences change their scheduling, so they have their marquee match ups later in the season to make their teams more attractive?  Ohio State is classic example, losing a game to an inferior opponent is OK, as long as you finish strong.  Time will tell, but it makes sense to me that conferences will do all they can to make their teams more relevant.  I believe the conferences set their schedules annually, so they can assess the strength of each team year over year and schedule their games accordingly.

What we saw in year one of the playoffs is that losses didn't kill you and beating bad teams didn't help. What did grab the committee's attention were quality wins. Early losses didn't hurt as much as great wins helped. I think you will see scheduling in the future reflect this.

You are exactly right about those called 3rd strikes too!  I broke the battery cover off my remote watching take strikes in the College World Series.  This has been going on a while.  I really thought some more about this tonight, and I don't think it is a coincidence that we saw our hitting performance decline after the departure of O'Sullivan.  Hear me out on this.  O'Sullivan was the pitching coach.  During his tenure, our pitching rhythm was crazy fast.  The batter was looking at a pitch before he could get comfortable in the batter's box.  Our games got finished about 45 min sooner than they do now.  Even pitchers who were pitching from the windup must've been taught to take a miniature quick step because there was not much differentiation between the stretch and the windup with any pitcher.  Anyway, I really think the speed and the rhythm of the game had a positive effect on our hitting.  What do you think about this hypothesis?  I think the speed of the game established by our pitching had a tendency to make our hitters more aggressive at the plate.  I think they took pride in owning the rhythm of the game, and we often saw hits on the first and second pitches with all our hitters.  They kept the game moving.  You've noticed the recent push by the MLB to speed up the game by not letting hitters step out of the batter's box.  I've always thought that anytime someone is deliberate about something in sports they are less likely to perform well.  In almost all cases in a sport involving a ball, performance is about "looking and reacting."  That's why the fast routines established by our pitchers worked well as they quickly looked at the mitt and reacted to the target with a pitch.  I think it carried over into our hitting.  It was definitely entertaining for the fans with quick games and one of the best runs we've ever had.  Just a thought.  Or, maybe we just had guys who loved hitting the hell out of the ball!

The pace of the game does matter. Look at the Virginia series as an example. Virginia plays very slow and we get impatient. As a result, Virginia has dominated Clemson in baseball the past few seasons. Virginia wins by investing in pitching. They are not considered a great hitting program. Can this be an even better example of your hypothesis? I had never thought of it but you could be on to something.