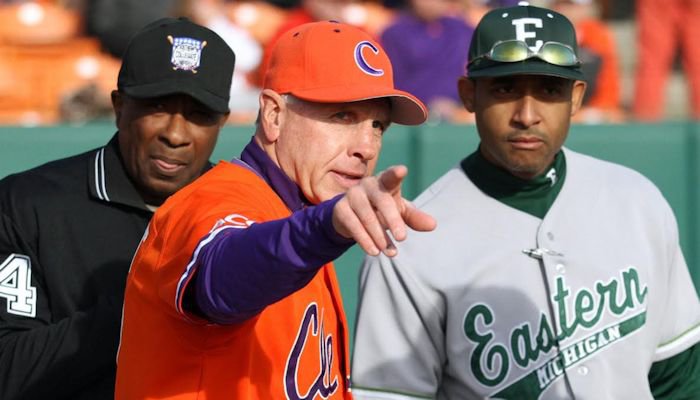 Loved seeing one of our pitchers go the distance in the series this weekend.  Too often I've seen us pull a guy who is on time in the 6th or 7th after a pitch count number is reached and we give away the game with the closer.  USC proved with some of their aces during their championship runs that letting a guy go the distance could be key to winning those tough ones.  I want to commend the coaches on the decision and would like to see more of that. Good stuff.

Now, my 2nd point.  I've said it to you many times before, but why are we not aggressive at the plate?  It can't be a coincidence that we've watched this for 10 years now.  As great as the wins were this weekend, we had the loss today to Winthrop and 7 hits during the Saturday loss with many called strikes.  In college ball, when you're not in double digits in the hits column, you are getting blown out, especially in our conference.  We actually have had this consistent conservative strategy at the plate for years, and we are able to win some games when a handful of our hitters get hot.  When they're not, our run tally is weak.  We rarely, if ever, see aggressive hitting from the entire team.  You threw up some stats in a blog the other day with the number of runs the top 4 or 5 ACC teams have chalked up during the first few games, and if we want to compete even in our own conference, we need more hits.  Believe it or not, a player can actually get a hit when a ball is not thrown in the strike zone.  We see this often with players who go to bat LOOKING TO GET A HIT and not WAITING FOR THE PERFECT PITCH.  As anyone who has played the game knows, you rarely get your perfect pitch.  There is a difference between being reckless at the plate and being aggressive, and I'd just like to see the guys chomping at the bit to get a hit.  I'd like to see many of our guys swinging at that first pitch, being aggressive, not taking the first one for a strike and playing catchup in the count.  Enough of the diatribe.  Would just like to see aggressive batting like we did 10-15 years ago.  I think we are close to being a really good team.

I think you make great points as usual. The trend in all levels of baseball is for batters to work the count and a product of that is increasing the pitch count. Major league hitters are much worse in my opinion, but many MLB hitters are comfortable hitting with two strikes. Some feel you only get one great pitch to hit in any at-bat. My biggest argument on the subject is the number of times you see Clemson hitters take strike three. In my opinion, I am swinging if it is close on a third strike. Anything near the plate gets a cut if it was up to me. I would like to see a called third strike viewed as a major sin of baseball.

I think the loss today to Winthrop puts the series win over USC into perspective. We beat a not-so-good Gamecock team rather than their NCAA championship team. Then we lost to a mediocre Winthrop team. I am afraid we need to get much better to go to Omaha.

The season is young but I don't think this is your typical South Carolina baseball team. I don't know what Clemson has yet. The bullpen looks better. I like the weekend starters. The offense has potential but it is too early to make a sound evaluation just yet. But in eyeballing USC, they don't look the same.

When will Coach Brownell's buyout on his contract be reasonable for Clemson to have the option to replace him?

I think Brownell has two more years before he is judged. Next year will be tough because they will play all home games in Greenville. The first year of the new arena will be big in evaluating Brownell at Clemson.

Mickey, seems simple to me.  Why risk the future?  If the coaches think Bryant is the future, redshirt him.  I understand that making that move could be a risk for this season, but I would rather take that risk and have Bryant ready to take over the reigns.  I think that strategy did wonders for Tahj and this could work for  him too.  I am sure the coaches will do the right  thing, but I think you are taking a bigger risk not redshirting Bryant.  If Watson goes down, not sure the season would be salvageable anyway.

Don't forget Bryant could be red-shirted the following season. He could play this year in case of an emergency, then red-shirt in 2015. Who knows what is going to happen. Will Watson leave after 2016? Will Bryant beat out Israel by then? How good is 2016 commitment Zerrick Cooper? At this point it is way too early to know what will happen. Let's let this thing play out.