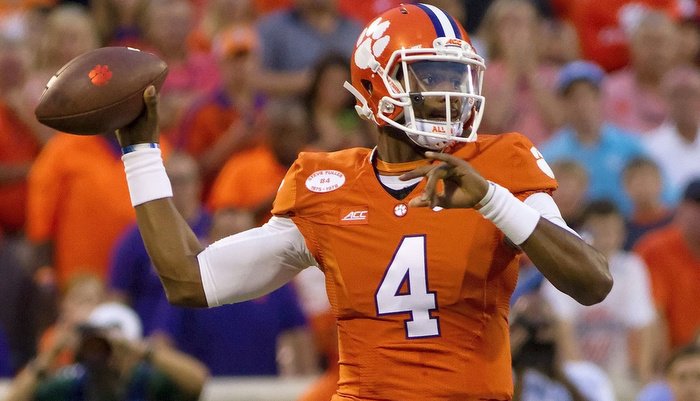 I understand that the play Watson hurt himself on was not a designed draw play, but the run was an option for him. We as fans did not want to see Watson take off in that game for fear of him doing more harm to his throwing hand, but it is understandable that he would have to scramble a few times. However, my dad and I were both a little shocked at how many times he ran the ball before getting injured--again--which brings me to my point. Obviously, to have a great shot at winning this game, we want to see Watson trot out on the field to lead the offense. I hope we try to establish a run game in a different way without using Watson who has an injured knee and an injured hand. I don't like to talk about the ole ball coach's creativity on rivalry week, but I have to give him credit for finding a way to establish a running game when they've come up empty on occasion. I've seen them be successful with the pistol to Mike Davis and I've also seen them direct snap to one of their receivers, Bruce Ellington a few years ago with some success. I hear Dabo say that "we are going to do what we do better than anyone," but at times they seem to stick with a failing offensive game plan to a fault with no backup options and very little creativity. Again, I know we are limited by average backs and an average line, but we as fans just want to see effort in trying to score because we know that the current game plan isn't working.

So, to sum up, two fears going into Sat. One, is that Watson is too injured to establish a run game threat in combination with our backs and the line is not effective enough to establish a run threat. Two, Stoudt takes over for an injured Watson or starts in the place of Watson. If I am USC, my defensive game plan is to make Clemson beat me with the run if Watson starts. So, what are we going to do to mix it up? In my opinion, I think we try something different--a direct snap to Dye which will give an additional blocker to help our line, or a direct snap to Artavis Scott

Artavis Scott
Fr. Wide Receiver
#3 5-11, 190
Oldsmar, FL
View Full Profile and we try to use speed to make up for our weaknesses on the line. I feel like we absolutely need to see something like this if we try to establish a normal run threat with dye and the other backs and it is just not working. What I don't want to see is Watson realize that he is going to have to pick up the slack for our lack of run threat and hurt himself because you and I both know he will do whatever it takes to gain yards and he will take off. Your thoughts?

There is obviously a huge difference on offense with the starting quarterback compared to the back up quarterback. The starter makes the offense so much harder to defend because he creates balance. Without him, there is no balance. Clemson has not been a good Wildcat team in the past but maybe we will see more Wildcat this weekend. I do think Tyshon Dye

Tyshon Dye
RS Fr. Running Back
#23 5-11, 214
Elberton, GA
View Full Profile gives Clemson a running threat it has not had all week. I would like to see Watson stay in the pocket more, especially this week.

Listening to Paul Strelow on your Thursday day morning show. He said Tanner Muse could move up in stars after Shrine Bowl. But he was not at his visit on Saturday to Clemson and looks like he will not be early enroll in January so he can play high school baseball. Do you think he will make it to Clemson or take MLB draft to baseball

The baseball people I talk to say it is way too early to know Muse's pro draft status. He is raw in baseball and will need a big senior season to move up draft boards. But he is big and athletic and some teams may be intrigued. But at this time it is too early to project if he comes to Clemson or goes in the baseball draft.

I have been a huge, lifetime Tiger fan and started going to games with my grandparents in the early 60's and your column today was spot on because the Head Ball Coach is a genius.   We will see passes to backs, wheel routes, passes to tight ends splitting the defense and runs by physical backs in obvious passing situations especially in the red zone.   It just kills me that Coach Spurrier has found a way to take over the rivalry and I hope that your thought that the Tiger defense will be the best South Carolina has faced will be true and the worm will turn this Saturday.

Spurrier is good but the key to their streak is the defense. The Gamecocks have been very good on defense, especially up front. The Carolina defense has created turnovers and field position for their offense. This year their offense is better and I am sure we will see a good game plan from Spurrier.

I coached basketball for over 20 years. The way that Clemson lost to Winthrop and Gardner Webb should not happen to a middle school team. The media has been telling us that we have a great coach yet we have not seen any results. What we have seen this year is horrendous coaching at the end of 2 games against opponents that Clemson is supposed to beat. How do you defend calling a timeout that you do not have? Thanks!

I take exception to the notion that our coaches are blindly loyal to upperclassmen. Rather, I believe they value experience over expectations. They have the benefit of seeing all these players perform on the practice field, participate in meetings and handle themselves in off-the-field situations. They know better that all of us armchair coaches who is best prepared in all facets of their assignment to perform on game day.

I disagree. I would rather have talent over experience. It was obvious to me that Watson was better Stoudt, Scott was better than Hunphries and several backs were better than Howard. I guess we will agree to disagree.

I enjoy most of your post and tend to agree with your assessment of sports at Clemson although sometimes you are a bit to negative for me but I know that's just because I always look on the bright  side of things and will support my team regardless as long as its just on field issues. Now don't get me wrong I like to win as much as anybody and in my 49 years the Clemson Tigers have provided many many more wins than they have losses. I appreciate the hard work that the players put into the program to have themselves prepared for games and I am happy for them when they have success and I hurt for them when they are not as successful. Coach Sweeney has taken the football program to heights it has not seen ever in its existence or at least sense the Danny Ford

Danny Ford
Former Head Coach
View Full Profile era. He should be lauded and applauded for the job he has done, so here is my question.

Why do you even acknowledge some of the emails you get asking about firing coaches and acting like Clemson has not won a game sense Coach Sweeney was hired? I must be honest if I was looking for a team to cheer for and I saw all of the negativity and out right pathetic attitudes that are displayed in some of the emails and on the message boards it would not  encourage me to be a Clemson fan.

I know we have lost to South Carolina for 5 years in a row and I pray that it changes next weekend and I truly believe at some point the ball has to bounce in Clemson's favor.

Thanks for your thoughts and the updates on Clemson sports. Go Tigers

The reason I answer those emails is I answer all emails. Some people see things in a positive light while others are more negative. However, I answer every email.