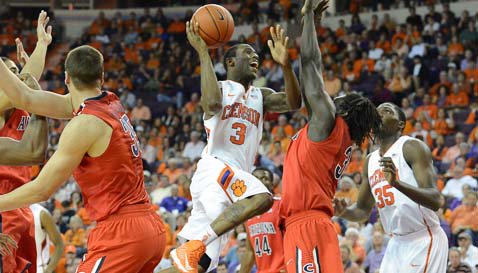 The fact that we have trouble supporting our basketball team is sickening. We're an ACC Basketball school, for God's sake.

What is wrong with you people? You want Clemson to be seen as a special place, yet y'all act like the fair weather fans at other schools like uscjr.

I agree 100% with you. I do understand families are busy with work and kids and I do understand that the economy has affected a lot of families to the point where discretionary income is an issue. However, many of these olympic sports are free and a heck of a lot of fun. I would encourage anyone who has not been to check out a indoor track meet or a volleyball game. These are two of my favorite sports. I have been to some great tennis matches on a nice spring afternoon as well. It is fun to take interest in a team and follow them closely.

To your point about basketball, I am encouraged about the fan support of basketball. This NIT run has renewed my faith in the Clemson fans and now I see they can care about men's basketball.

On the future of Clemson basketball, excellent write up. I think basketball should be just as big as football. Why not? When the football season ends, the basketball season begins. Why not put full support into this? If K.J. stays, this team next year will be incredible. They will be good without K.J. but it would just be on another level if he would remain for one more year. We need to encourage him to stay.

I've been a season ticket holder for the Clemson men's basketball program since the second year of the Rick Barnes era. I've witnessed first hand the success of the Barnes, Purnell and now the Brownell eras. In each case, the inability in maintaining this success has never been the fault of the Clemson fan base. No, that responsibility rests solely on the shoulders of the Clemson administration. If the Clemson administration would have fulfilled it's responsibilities in regard to facility improvements and communication/relationship with the Atlantic Coast Conference, the men's and women's basketball program would have had sustained this success.

Attendance woes at Clemson can be directly related to poor performance issues and the knowledge by the Clemson fan base that the ACC will do anything to prevent Clemson from winning, e.g., the Duke game. Have you forgotten the 41 foul UNC game or the officiating in the last 5 minutes of the ACC Championship game? I challenge you to provide to me and your listeners a list those basketball programs that have outstanding attendance during November and December that have successful football programs. Here's a hint, they don't exist. The only institutions that don't have basketball attendance issues either do not have football programs or have historically poor football programs.

If you really have an interest in seeing the basketball programs at Clemson succeed, then you will hold the Clemson administration's feet to the fire regarding facility improvements.

Thanks for the email. I agree with you. If you want to go back farther, Clemson's lack of success can be traced back to the 1950s. The administration did not put full effort into the program then and it still shows today. I am hopeful that a new athletic director, a new president and some renewed interest by the leadership on the board of trustees will help support this program to its full potential. It is easy to see places build programs. Look at schools like Gonzaga, Virginia Commonwealth, Wichita State and Butler. They may have caught lightening in a bottle but I think they have supported their programs. I have more confidence today that I have in a long time in the administration that they will support basketball. I also agree with you that results will soon follow.

Mickey- I enjoy the blog. Keep up the good work

What have you heard about any teams We are talking to for the 2016/17/18 OOC games? Any possibility of a chick-fil-a kickoff game with Georgia in 2016?

Clemson does have some flexibility and room on the 2016, 2017 and 2018 schedules for home, away and neutral site games. I know Coach Swinney has enjoyed the bigger opponents like Georgia and Auburn on the schedule.

On a side note, last week I had a email question about the OOC basketball schedule for next year and asked Brad Brownell

Brad Brownell
Head Coach
View Full Profile about it. We will play in the ACC/Big 10 challenge next season. We will play at South Carolina. Clemson will host Auburn and Arkansas in Littlejohn and the Tigers will in the Paradise Jam tournament next season.

I enjoy your blogs

I don't understand why ESPN promotes the NIT as a big deal for ratings then jumps Clemson fans for getting excited about winning. It seems hypocritical to me.

My other point is that I don't need ESPN to give me permission to get excited about my favorite teams. I can make that judgement.

Finally, rushing the court was not about the NIT or Belmont. It was about a fan base that has fallen in love with this basketball coach and team. It was about the energy in the program in the last two games.

First off it sure is great to be a Clemson fan.  I hope you're doing well in your life and career.  I have a couple questions if you could find the time to answer them,

Do we have a chance of landing any of these OL: Jake, Fruhmorgen (leaning Clemson even after florida visit), Chuma Edoga, Martez Ivey, Zach Bailey, Mason Veal (gamecock lean?), or George Brown?  WIth Hyatt and Green on board if we could land just 2 of them we would have best OL class based on scouting in the entire country.  Now on the DL.

Michael Barnett decommitting from Va Tech the day we offered him tells me that's where he's wanted to go all along.  Other than that, Huggins seems 55% Clemson and 45% everywhere else.  Said that if USC (real one) offered him he would go there.  Blackshear is another huge loss.  Rasool Clemons is interesting to me.  Same body type as Barnett and hails South Aiken and we all know what a legacy we have there.  Now, was far as the new JUCO majors added now at Clemson will put us in the mix for DT  Markevious Lewis from Greenwood.  Would SHOCK me if he went anywhere but South Carolina.  We recruit Greenwood terribly and it has hurt us.  Ask Quarles and Swearinger.  Sam Montgomery, well, not so much.  hahah   DBKaleb Chalmers and LB Davon Durant are future Division 1 players from Greenwood.  Bet we lose out on all of them.

And how about the addition of Damarcus Harrison

Damarcus Harrison
Jr. Guard
#21 6-4, 200
Greenwood, SC
View Full Profile from Greenwood making a HUGE difference this year and I would expect him to be an impact player next year based on n his elevation of play over the course of the past two seasons.

Thanks Mickey, have a great weekend.

Clemson has a significant lead over Florida for Fruhmorgen. I think he will commit in the next three weeks. If it was today then Clemson would get the commitment.

Tennessee leads for Edoga. I doubt Clemson has a chance there. Martez Ivey is leaning to Florida and Clemson is not much of a factor. I think Clemson has a lead over South Carolina for Bailey. North Carolina leads for Veal. Kentucky leads for Brown.

Clemson, FSU and Georgia are the three leaders for Barnett. Huggins remains a Clemson lean. Clemons really likes LSU. The only JUCO DL Clemson has a great chance at is DJ Jones. I think Chalmers is a slight lean to South Carolina.

Harrison has made huge strides and appears to be set to have a very good season next year. He will be a key to next year's success.

I have to admit to being a bandwagon basketball fan, but I have found myself over the past two years watching more basketball games than I ever had.  This year in particular has been very intriguing and instead of wondering when Clemson was going to “pull a Clemson” and find a way to lose (ok, except for the Pittsburgh game), I feel we are competitive and can win each game.  We are making free throws when they matter.  We are not as dependent on one or two players, eight scored meaningful points last night, which is part of how we won.  We all know Clemson will always be a football school, but Florida, Ohio State, and Texas to name just a few can make it all work.  No reason why Clemson can’t as well.  It starts with Brownell and he has us on the right path.  Time for the administration to step up and it sounds like they are.

I agree with your thoughts. This is an exciting time in Clemson basketball. I think the future appears to be very bright. I love the direction of the program and where Brownell is taking this program.

Dabo Swinney
Head Coach
View Full Profile has made a point of emphasizing that he takes a commitment to Clemson as a promise to attend the university.  So, it makes me wonder how "Clemson offers Miss State commit" - Anthony Hines.  How can we hold our commits to their promise, but also recruit young student athletes that have made a promise to another university?

Welcome to the cut throat world of recruiting. Its kill or be killed. Like every other school in the country, Clemson recruits players still committed to other schools just like they do players that are committed to Clemson. It seems hypocritical but this is how it works.

Considering that Cameron is only 9,300 seats.. and it is the best environment in today's game.. I am not sure it will not serve Clemson to move back to less than 10,000 seats.. If we ever build a program as strong as Duke's.. then you will have more than enough money to expand it.

The plan I have seen most recently calls for a reduction of 1,500 seats. The new building will hold 8,500. The plans call for more luxury suites which will increase revenue flow. My hope is that it will create more of an intimidating atmosphere.