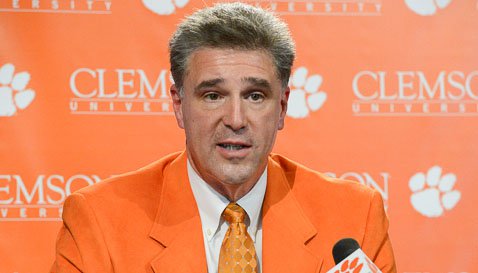 Just wanted to thank you for your Blog that I have looked so forward to reading as my most "Must Read" Clemson info every single day.  I understand Dec was a challenging time, but I wanted you to know, you were missed on those days.  I can't get enough "Clemson Stuff" and yours has always been my favorite.  My Dad is Class of '50, but I am actually a '77 Citadel grad & Clemson season ticket holder since 2006 when I could get close enough after retiring from the USAF.  Dad would take my brother & I up in the 60s (we lived in Columbia) and we would sit in Section GG (Green Grass--Frank Howard's reference to "The Hill").  I did wear Blue to the Citadel game this year but stood and cheered every good Clemson play along with my brother, another Citadel grad, whose wife and two children are also Clemson grads.  No one cheered louder for Tajh when they finally took him out than we did.  The Clemson folks around us thought we were a bit crazy, if not conflicted to say the least.  My three favorite sports moments ever: 2002 Orange Bowl Nat'l Championship, '95 World Series win for the Braves, & 2012 Chick-Fil-A win...we need one more performance like that from Tajh.

This is not meant to be a negative critique, but I have observed that it seems your blog has evolved over the last several years from a more opinionated piece to one that is more factual and more of a presentation of data & statistics.  It is always really good info, but I think I appreciated your blogs the most when you gave the "inside scoop" and those where you called it like it was.  (I do realize it might be harder to get that inside scoop if you alienate your sources by calling it like you see it.) Having said that, I specifically remember you being critical of leadership at the University and in the Athletics Dept several years back and I also observed marked improvement in those areas---seemingly very soon after your blogs were published.  Notwithstanding the fact that I am a self-professed "Plyler Blog Junkie," I do believe you have and will continue to be a catalyst for change/improvements at Clemson.  Sometimes, people on the very inside need to hear the truth, and those same people know deep down you only want what's best for Clemson.  I believe that is why they "hear you" when you take a position. I'm a HUGE Dabo supporter so I suppose there really isn't much negative for you to opine about these days outside of the coot streak....But, if you ever see anything, please jump on it.  It might just make a difference.   Thank you again for what you do...and as everyday, I await my daily fix.  Happy New Year to you and Ryan.  Go Tigers, Ryan in Athens GA---good name isn't it!

Thanks for the great email. I have always had a great amount of respect for The Citadel and have many friends who went to school there. That has to be a weird feeling for you on the rare times Clemson and The Citadel play.

I took your email as very constructive. First, the athletic department has become much more difficult to get inside information in recent years. Like many schools, Clemson has decided to control the message. We have much less interaction with coaches and players than ever before due to the latest media rules set down by the athletic department.

I think you are giving me too much credit on the subject of change. I was very vocal about the leadership at the university level and within the athletic department but was only one little radio host and blogger. Those opinions on the leadership were difficult to express but truthful.

Over the past couple of years I like most of the changes I have seen. I also now believe as a result of those changes, Clemson has set itself up for a foundation for long-term success in a lot of areas.

Finally, you are also right in that there is less to complain about with over 30 wins and two Orange Bowls in football over the last three seasons. That seems to fix a lot. I also believe the rivalry with South Carolina is about to turn back in Clemson's favor.

Thanks for the terrific email and I promise I will "jump" when I see fit. Happy New Year!

Hi Mickey...Firstly, yes, I am a Gamecock fan and visit Tigernet on a regular basis just to get a flavor for what's going on with our rivals. With that confession out of the way, I've just GOT to ask: Why is it considered taboo to actually admit that USC won the football game in November? All that is stated is that "Clemson beat Clemson. Without the turnovers, Clemson would have won."

Is it not a fact that, except for the first muffed punt, those turnovers were CAUSED by USC players making the plays? Are turnovers not a part of the actual game itself?

If turnovers were indeed the reason for Clemson beating Clemson rather than USC beating Clemson, then obviously we can carry that logic through all of Clemson's victories this season, no? That means

1. Georgia beat Georgia with the two turnovers against Clemson

2. With three turnovers, South Carolina State obviously beat themselves rather than the Tigers doing it

3. With a whopping four turnovers, it was actually Syracuse that beat Syracuse.

Thanks for the email. I think you make sound points because South Carolina did create turnovers. I think it is hard for any Clemson fan to deal with South Carolina's success and most of us have a hard time dealing with losing five in a row.

In this year's game I think six turnovers was a major factor. I think you are right that turnovers were a big part of the Clemson-Georgia game and Georgia fans pointed that out. Clemson would have beaten South Carolina State and Syracuse without the turnovers and the margin of victory was more than just the effects of the turnovers. Meanwhile the six turnovers in the South Carolina game was well within the margin of the game and had a bigger effect on deciding the winner and loser. In other words, Clemson's margin of victory may have been larger because Syracuse and South Carolina State but the result was not in question. The Clemson-South Carolina game was tied in the fourth quarter.

Just read your blog and I can relate to the sickness. Thanks for how you represent Clemson as well as the human side of life.

Thanks for the kind words. I am hopeful all three illnesses left with the month of December. I have a great deal of respect for anyone with a chronic illness or anyone that has to face long term issues like chemo. I am not very experienced at feeling bad for a long period of time but I didn't deal with it very well. I hope you are feeling better and hope 2014 is a great one for you!

Why would would anyone ever consider Martavis Bryant

Martavis Bryant
Jr. Wide Receiver
#1 6-5, 200
Calhoun Falls, SC
View Full Profile an NFL prospect in any year not to mention this year? Thanks.

Bryant is a prospect because of his physical attributes. He has great size and speed. His hands, maturity and accountability are still in question. Like many prospects, Bryant is not just considering the football aspect of his decision. He has a lot of different things to consider like academics and family needs.