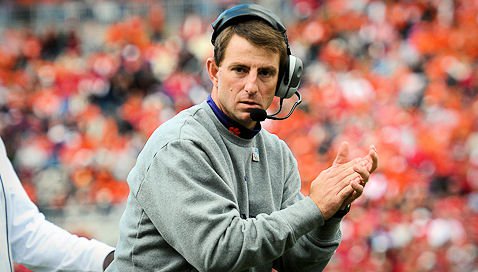 I fully support Dabo and staff, however I don't know what to think about the fact that our 2 biggest games in the last 30 years (the WV BCS game and the 2013 FSU game) were humiliating loses (if they were close, no problem) and the fact that we've lost 5 in a row to USC. How do you make peace with those games and move on?  It's disconcerting to me.

There was an article a few weeks back on tnet asking where the fan support has gone, page clicks were way down.  I can answer for me and I suspect some others.  Compared to the Georgia game, the FSU game, and USC, the ACC opponents seemed like tomato cans, nothing to gain, a lot to lose, not much excitement, there was nothing on the line if we win.  I wish a few of the ACC opponents were ranked, that would add some zing to the game.  Duke would have been an exciting game this year.  And the way FSu beat us was really deflating followed by the USC downer.  Regarding the Citadel game, there was no chance of losing that game, so there is zero hype from a pure football perspective, so without a real football game, the events surrounding the game ring hollow. Who wants to watch a game where the outcome is known ahead of time with 100% confidence?  Enough to fill the stadium I know, but it's a real snoozer if you want to see a real game.

Clemson is paying a cost for its success. The snoozer games are because the Tigers have improved to become a top 15 type of team. This was not the issue a few years back. I remember the days of Boston College, NC State, Wake Forest and Maryland beating Clemson. Now they are not close, so it appears to be snoozers. No one likes losing to FSU but that might be the best team in college football in the last ten years. The USC game is inexcusable but how do you account for six turnovers? Unlike some, I don't have a short memory. I remember being a 7-5 team so 10-2 looks good to me.

Mickey, now that the sting has worn off and I can look objectively back at this past weekend I see something that I saw in the Florida State game.  When a team  makes as many turnovers as we did in those two games alone,  you have to ask why, especially when those two games account for the majority of the annual turnover number.   The common denominators are: big games with future implications and bad things happening early.  The defense did their job, but the offense could not recover in either of those games.  They simply got tight and bordered on playing in desperation.  One could argue we had the same in the LSU game, but the difference was the season was over, so they never got tight and played loose.   This is where Dabo has a learning opportunity in his coaching maturation.  He has to find a way to calm the players down and let them do what they do best.  I am sure he told them that, but not sure they heard him. We all know you have to be a psychologist with these kids and something Dabo has to figure out how do in game prep and during the game.

I think the LSU and Georgia games were big games and Clemson was not tight then. The Tigers played bad against FSU and USC. Ten turnovers doomed the Tigers.

To badly paraphrase an old saying, winners laugh and sing and losers say deal again dang it.   Once we again we saw a Clemson team self-destruct in a big game and finding the cause has got to be job number one.    As a golfer you know that there are basic fundamentals that if neglected the shot will not be carried out as needed and the same goes for football.    Are turnovers a result of lack of coaching, lack of focus, lack of strength or lack of what it takes inside each person to overcome obstacles and make a play?    I don’t know the answer but one has got to be found because we cannot expect the talent level at South Carolina and Florida to sink and if Clemson is to win the “big” games turnovers have to stop, period.

I hate losing. I was miserable in the FSU and USC losses. But I think LSU and Georgia were big wins and I have not chosen to simply forget about those wins.

Love the show and listen all the time.

However, one thing is disturbing me on an epic level is all of the excuse making after the game.  I keep hearing and seeing articles talking about "Clemson beating Clemson".  Frankly, that's garbage.

In the blog, you mention Clemson playing tight and making mistakes while South Carolina playing care free.  But why?  Because they were intimidated and scared and have been for 5 years.  I fully expect you to reject that point, but why else do we always play so tight against them and not against others?  It's clearly mental.  We were scared against FSU as well.  In addition, South Carolina players approach that game with an attitude to win and be physical.  Clemson players seem just happy to be there.  They do not have an attitude to take it from them and hurt their feelings.  To say otherwise, is to indicate a severe talent gap and I just don't think that's true.

Tajh Boyd
RS Sr. Quarterback
#10 6-1, 225
Hampton, VA
View Full Profile was scared the moment he walked on the field.  You could see his "happy feet" from the beginning.  It's why he rushed his throws, didn't read defenses, didn't trust the pocket, or check down to other receivers.

Secondly, the coaching staff was intimidated.  That's why we called the trick play on the first series.  Morris did not feel we could score on them running our normal offense.  He obviously believed he had to trick them.

Thirdly, South Carolina's O ran all over us.  They ran the exact same plays they have all year.  There was no real surprises.  Shaw's good, but there is no way he should be able to run like that on our D.

Fourthly, South Carolina created 5 out of 6 of those turnovers by taking the ball away from us or playing excellent defense.  "If we just don't turn it over."...Well, SC TOOK it from you.  Other than the Humphries punt, SC took it from you.  We didn't just drop the ball on our own.  And how "Bad News Bears" of Bryant to run into Humphries on the other punt.

"Clemson beating Clemson" is what losers say.  Give South Carolina credit for beating the snot out of us for the last 5 years.  South Carolina wanted it more and were more physical.  They out-coached us.  They out-manned us.  And, they out-played us.  Dabo likes to think we are "elite".  Well, Clemson will be "elite" when it bothers to show up for big games and doesn't cower against physical teams.

I disagree with most of your points. I do think turnovers were the difference in the South Carolina game. Sorry but I think Clemson would have won the game without the turnovers. I guess that makes me a loser.

Thanks Mickey for your continued good work. One thing that u haven't seen mentioned was the 4th down play after we has just scored to tie it and were called for offsides. In my opinion, that play completely changed the momentum if the game. It was clear in TV that the center moved but it didn't get called and we jumped into the neutral zone. Clearly this one play did not cause us to lose the game but it did have a HUGE impact on the current flow at the time. Hats off to the cocks and specially Connor Shaw. He can play. But would never trade our team or coaches for any other. Go Tigers!

I am not sure of the rule but it was a big play. That penalty keep a key drive going and made a huge difference in the game.

Levon Kirkland
Linebacker
# 0, 0
,
View Full Profile and family, Catherine Sewell, Randy Davenport, and our great country and the men and women in uniform that protect and serve it every day plus their families.