Hope all is well. I am writing to talk about Ben Cleveland the Kid from Stephens County Georgia we are recruiting he is going to be a monster. The Coaching Staff there at Stephens County is getting this kid ready to be a special tool what a wonderful staff they have there. I won't to know what you have heard around the program about this Great Kid? Hope all is well with Ryan Be Blessed Mickey

I hear great things about Cleveland. I think he is just turning 15 years old but is already over 6-6 and 300 pounds. My Georgia guys says this is a Clemson-Georgia battle but it is early. Its hard to believe that we are talking about 2016 prospects but Cleveland already has offers from Clemson, Georgia, South Carolina, Florida, Texas and several others.

Hi Mickey. I look forward to reading your Blogs! I wanted to ask if you could explain the kinds of contact the football coaches can have with the players between the end of Spring Practice and the beginning of Fall Camp. I know some contact happens, like at the Summer Camps for younger athletes, but I'm sure there's limits? Do the players have direct contact with Strength Coaches? Nutrition people? I'm just curious, and I'm sure lots of it is voluntary for the players anyway. Thanks in advance for shedding light on this!

I was talking with my father-in-law who is a huge Wolfpack fan. We got to talking about Tajh and like most people he thinks Tajh is spectacular and would love to have him on his team. Of course I was beaming and talking proudly and boastfully about him and the team. I mentioned that we need Tajh to be consistent, and the offensive productivity depend on how how consistent Tajh is and how he will be able to manage the game. My father-in-law says there are enough weapons on the offense that can pick things up when Tajh is down. To me Tajh has to do a better job of managing the game and being consistent than just making the spectacular play. While we have tools that can be used to build the house, the architect has to be sound and consistent. I understand that both are important and one cannot exist without the other; however, if you had to put a higher importance, which would it be. A consistent Tajh or the other offensive weapons.

That is a tough question. If Boyd is inconsistent then the other players can't be successful. But if the receivers drop balls then it hurts as well. Tajh is the straw that stirs the drink. He does have the luxury of having big play guys around him and he has a great scheme but this is still Tajh's show.

I saw TigerFan4Life78's comments on Dabo, and how he has created a winning culture, and I thought he nailed it. I'm very proud of Dabo and Clemson Football and everything they have accomplished.

I'm ashamed to be associated with Clemson fans who do not support Dabo, most of their criticism stemming from our record against SCar during his tenure. Their version of being a Clemson fan revolves around being able to have bragging rights over a non-conference opponent, who happens to reside in the same state. I understand tradition because I'm from the upstate, but when your focus is on winning a National Championship, everything else takes a backseat, and your purpose for beating the Gamecocks is only to get to the ultimate goal, a National Title. If you place more value in this one game than all the others put together, then you're petty, and the best part of being a Clemson fan for you is getting to stick it to Scar fans at work, on Facebook, and sadly, your church. Do you think Nick Saban really places anymore value on beating Auburn than any other SEC opponent? -- probably not, and if he does, it's probably just to keep the crazy Tide fans from poisoning his lawn or garden.

I have never been more passionate about Clemson football; and this is because of Dabo Swinney 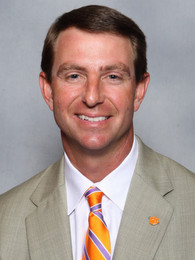 Dabo Swinney
Head Coach
View Full Profile , who wakes up every morning and utters those same words. I want to thank you for the great work you do, and your role in leading the "pro-Dabo" movement. Most are now on board, and if you're not by now, you should probably switch your allegiance to UCONN women's basketball. But seriously, you are a very influential figure in the Clemson Community, and its good to know you're representing Clemson the right way and with the right message.

Thanks for writing. I agree on Coach Swinney. He is building something special here. He is building it the right way and sounds like Saban when he talks about the process. I think great things are on the way.