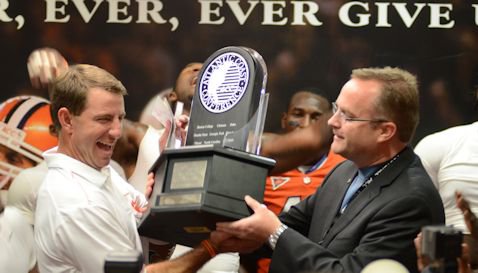 I read with interest your accolades about so many former players being invited and attending the Spring Game, being engaged with the program throughout the year, which I agree is fantastic and shows a lot of pride in our program. All great programs have this camaraderie and we certainly fit the mold with how our players hold Clemson in such high regard.

What I can’t understand is Dabo’s reluctance to embrace Coach Ford. He almost seems to have an underlying distain for the man and I really don’t know why. Many apologist on Tigernet, including you at times, seem to think Dabo is a mini-god and makes no bad decisions but this one is just mind-numbing. Ironically, Coach Ford is invited to speak at Spurrier’s Spring practice and the Ole Ball Sack has again thrown water on Clemson’s program. Think Spurrier is enjoying and using this little tidbit to his advantage??

I realize not everyone loves Coach Ford but there is a huge contingent of fans that do. I also think Spurrier is playing around with Dabo’s head and working it to his advantage.

I don't see it that way. I think Dabo has reached out to Coach Ford and I think their relationship is good. I could be wrong but I think they have a good relationship.

I think you like to hear cool Clemson stories so here's one from last night. Reading your blog has been a blessing for me especially when I lived outside of SC. More on that in a minute. I started attending Clemson football games my junior year of high school. My parents had season tickets so we did all home, some away, and most bowl games. I started Clemson in 1990 and graduated in 1994. In April 1991, my dad had a heart attack after a Clemson Baseball game (I wrote you about this when Daquan's Dad died). He would spend a week in Greenville Hospital while I took final exams. We both came home on Saturday, spent Sunday together, and on Monday he died from heart complications. So Clemson will always be a reminder of my relationship with my dad. After Clemson I went to Seminary in NC and became a youth pastor. After Seminary I got married and moved to VA for 6 years, then NC for 5, and then finally to SC the last couple of years. Financially we've struggled and even now my family of 6 has to live with my mom. However, with a large family and very little money I couldn't get back to Clemson. Yesterday, April 10 I had an interview near Liberty to become a high school teacher. After my interview, I traveled back to Clemson. It was one of the greatest days of my life. Being back among the Tiger Paws and sights and sounds of the campus was breath-taking. I have 4 kids, so I went to Knickerbockers, Tiger Sports, and TigerTown Graphics to load up on Clemson stuff. I walked around campus taking picture after picture so my kids could see the campus on Facebook. Walking in front of the Library, into Tillman, around the Athletic Facilities, and even the mail room brought back so many wonderful memories. And the coolest thing was a teenager from my first youth group is graduating in May from Forestry. He happened to be receiving an award in Forestry so I went to that and then we went to PAWS Diner to eat. He brought a Freshman with him. So here's a graduate, senior, and freshman talking about how special Clemson is. I then went to the baseball game where my dad and I spent so much time and actually would be the last place I would ever see him healthy. And of course Coach Leggett and the Tigers did not let me down with a last minute walk-off single in the ninth. I did not get home till 1:30 AM and had to teach high school the next day but it was all worth it. I love Clemson and really pray my next job is in that area. I just thought I'd send this after your Blog on Homecoming based on my return trip after being gone for 15 years. Clemson is a special place and unless you've spent a lot of time there as a student and/or fan you just don't understand. I'll be absent from the Spring Game and may not make any football games, but I'll be cheering on whether in front of a TV, radio, or computer. Go Tigers!!!

On Fire for Christ,

Thanks for the email. There is no doubt in my mind that Clemson is special and means so much to so many people. It means different things to different people but many of us value Clemson and understand that we can never repay Clemson for what it has given us. Hopefully your next job will mean a shorter trip to Clemson.

I know we hear a lot about the different positions on the Football Team, how each player is improving, who is expected to contribute, and the like.

We get a lot of feedback from the players.  How about all the support personnel??  Hope Ryan continues his wonderful rehab.  I know he is a blessing to your entire family.

Thanks for the kind words about Ryan. I think many fans don't understand the total team effort it takes to run a successful program. Every support team member is important but most work behind the scenes. Maybe we could focus on the entire support team more. Thanks.

I read your blog today and it struck a cord with me.  With Spring football ending, we only have to look forward to September and got me thinking about whether the media will continue their love affair of FSU.  Will they pass the tag line of "Pulling another Clemson" to "Pulling another FSU"?  Recent history would certainly suggest that should be case.   Clemson will be the class of the conference and have earned that right.  Hopefully they can get it right this year!!!!!  Time will only tell.

I am amazed Florida State continues to lose games to teams they have no business losing to under Jimbo Fisher. The Seminole fans I talk to are concerned about Fisher. They don't like the fact that his teams get upset by double-digit underdogs every year. They also didn't like the way Florida pushed them around last year.

I read your blog, "Homecoming", today.  I have always wondered if Clemson reaches out to former athletes in a formal way.  If not, then I think it would be smart to create an organization within the Athletic Department or IPTAY that invites former players to join.

The former players could then decide how they might best serve the interests of Clemson University.   Many of them have the resources, the enthusiasm, and the networks to make things happen.  Anyway, I thought I would throw that out there to see if you had any thoughts on it or could share with us what may already exist.

Hope you and Ryan get to catch a Yankees' game this summer!

I doubt Ryan and I will get to New York this year but hope to in the next few seasons. Clemson is hiring a CEO for IPTAY for the first time and that will be a focus. Also, Patrick Sapp has done a terrific job of reaching out to the former football players. Billy D and Charley Bussey have teamed up to take over the Tiger Lettermen association and they do a good job as well.

Wow, finally a basketball Championship game from the old school with running, gunning, high flying dunking, downtown Atlanta jump shots, kids actually making free throws and fun on top of fun.   Hopefully some recruits that can shoot and score will be interested in Clemson and Brad Brownell, John Doe, Jim Bob or whomever coaches basketball at Clemson were excited about seeing a great game where a team scored over 80 points.   Basketball should be fun and it was really fun last night.

I thought that was the best championship game I have ever seen. The thing I loved the most about this tournament was seeing how hard these teams played and how resilient they were. If I could have one thing added to Clemson basketball it would be the tenacity of Wichita State, VCU and Louisville.

I'd say that Louisville for Maryland was a pretty good trade for the ACC.

We came out of that smelling like a rose. Can we trade Boston College too?

Today's blog def struck a chord with me, thanks for that, it was great. Like you, I watched most skill of Clemson's basketball games, but didn't watch another until the tourney started. I wished and wished Greg Marshall would come here to coach while he was at Winthrop. To bad it didn't work out.

Like you, I'm not an MLB fan, I'm a Braves fan(sorry, I hate the Yankees) and have no team I root for in the AL. If Atl isn't in the playoffs, I don't watch. However it's different with football for me, I watch A LOT. Anyways, enough rambling.

Speaking of football, we all know The Chad wants to go even faster this season, if that's really even possible. My question is, do you think we will have a problem with non ACC refs during out of conf games. Do you foresee teams trying to slow us down by riding the refs, and trying to get them to not spot the ball so fast. I could def see Saban trying that if we were to meet up with them. With Ga first up, this is something that's concerned me, should it, or am I worrying about nothing?

Thanks for the great work, I check in daily. Hope the family, esp Ryan, are doing well.

I think what we saw in the Chic-fil-a Bowl we will see more often. It is hot in September and I think we can see Georgia players cramping or faking cramps to slow the game down. Morris wants to go even faster this season but one way to slow it down is injury timeouts. I can see teams practicing that tactic the week of the Clemson game.

It seems Deshaun Watson has a very close relationship with Chad Morris and some recruits are giving strong consideration to Clemson because of Watson's commitment. What is are the chances of Morris landing a HC position after this season, and what happens to Watson and the individuals looking at Clemson if Morris is selected as HC at another school?

This has been the issue for the last two seasons. Morris is a hot commodity and this won't change. Watson will enroll next January so if Morris does leave then he will have a short window to change his mind.