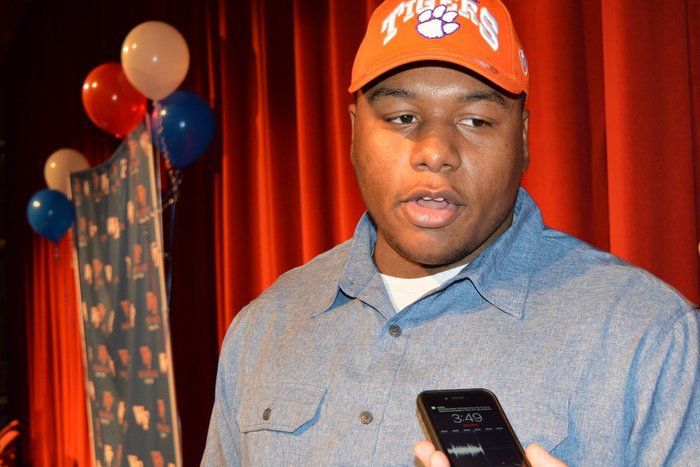 What a day for Clemson football! Monday Clemson added two huge commitments. The Tigers picked up maybe its highest-ranked prospect in school history yesterday when Dexter Lawrence committed to the Tigers over NC State, Alabama, Ohio State and Florida.

Last night Clemson flipped 2017 five-star quarterback Hunter Johnson of Brownsburg, IN from Tennessee to the Tigers. Johnson is rated the nation's number one quarterback in the class of 2017 and the overall number 12 prospect.

Today I will break down Lawrence's commitment, and tomorrow we will look at Johnson's commitment.

Lawrence is ranked as the nation's second overall prospect according to rivals.com. DaQuan Bowers was also ranked second when he signed with the Tigers.

This is a huge pickup for many reasons. Lawrence is a true five-star, can't miss prospect. At 6-4, 340 pounds he is a monster on the field. His film is amazing. You don't see players with bodies like this that move the way he moves. Lawrence, against high school offensive linemen, is a total mismatch.

Like many recent big-time stars that have committed to the Tigers, Lawrence is a bright young man that is low-key off of the field. He shies away from media attention. Lawrence is a humble kid that stayed very quiet throughout this entire process.

It is also rare to find a player of his size and ability that has his kind of motor. Often you see big men that dominate at the high school level take plays off. It is frustrating to watch great talents that aren't driven, but that is not the case with Lawrence.

One of the best compliments you could give Lawrence is the fact that he doesn't look 340 pounds. Joey Batson and the strength and conditioning staff at Clemson are not going to have to reshape his body. This five-star is ready to play right away.

Another consideration is, how polished Lawrence will be when he arrives next month? You can tell he has been well-coached and is not a raw kid that will have to go through a developmental season.

Lawrence will enroll at Clemson next month and will get an early jump on school, conditioning, and spring practice.

I love what he brings to the table regarding what he adds to a defense. Lawrence is a massive run-stopper that is a two-gap player. Lawrence clogs holes and makes it very difficult to run on the interior. He is athletic enough to rush the passer with a wide variety of pass rushing moves, but I love how he can collapse the pocket from the inside. A major push up the middle can cause havoc on a quarterback and his comfort level in the pocket.

Defensive coordinator Brent Venables and defensive tackle coach Dan Brooks will love having this physically and emotionally mature player here in January. Lawrence makes everyone around him better. Competition at defensive tackle just got even better. Carlos Watkins should return for his senior season. Freshman five-star stud Christian Wilkins is set to make another major jump. Scott Pagano is a rising junior who played well last season. Albert Huggins is a rising star after his true-freshman season. Jabril Robinson was impressive as a red-shirt freshman this past season. Clemson also red-shirted Gage Cervenka and Sterling Johnson this past year and Nyles Pickney is another four-star that will be here in January.

The other defensive tackle will benefit in that so much attention will have to go to Lawrence. With Lawrence and Wilkins on the field at the same time, which five-star do you double team? With those talented guys taking on attention on the interior, defensive ends will reap the benefits. Linebackers also benefit that those guys will take up so much attention up front. Finally, defensive backs will love the fact that run support is better up front, and they will have to be depended on less in that category and a terror as a pass rusher means less time covering and potentially more interceptions.

It's easy to see how Clemson got a whole lot better yesterday. A consensus five-star defensive tackle and the nation's number two ranked prospect according to rivals.com. Dabo and Jeff Scott keep saying the best is yet to come. Yesterday was another big step.