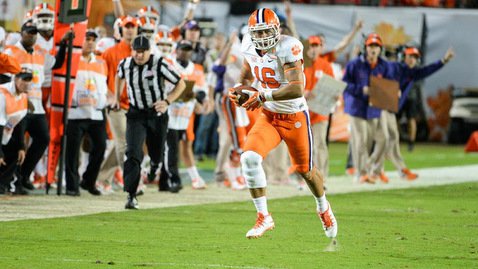 There are a few players who are facing a critical spring practice this year at Clemson.

Joe Gore
RS Sr. Offensive Tackle
#73 6-5, 290
Lake Waccamaw, NC
View Full Profile . He entered the fall as the number one right tackle, but Gore did not live up to expectations. He has all of the physical tools to be one of the top tackles in the Atlantic Coast Conference, but his production has not matched his ability.

Gore has not had the mental edge that is needed to be dominant. He has suffered injuries. He has also suffered from a lack of competitive spirit at times. Last year some were disappointed that Gore folded his tent when times got tough.

With a new crop of younger and talented tackles in this spring, Gore has to make his final move. Can he hold off the younger players? Can he mature? Can he be counted on? This is a major storyline this spring.

Jordan Leggett
Jr. Tight End
#16 6-5, 250
Navarre, FL
View Full Profile is in the same boat. Leggett has a boatload of ability. He has shown flashes of brilliance. However, they have only been flashes. Consistency has been a big issue and Leggett needs to show maturity and take control of the tight end position.

Clemson's offense is a great opportunity for a tight end, and Leggett can be a big playmaker in this scheme. However, he needs to show that now, because younger, talented tight ends are emerging.

Zac Brooks
Running Back (2012 - 2015)
#24 6-0, 200
Jonesboro, AR
View Full Profile was a highly recruited prospect but has been a slight disappointment to this point. He suffered an injury last season which allowed other backs to make their case for playing time. This spring Brooks is healthy and needs to emerge as a consistent threat in the backfield.

Germone Hopper
RS Jr. Wide Receiver
#5 5-11, 175
Charlotte, NC
View Full Profile has been in and out of the doghouse at times in his career. The staff has experienced options as starters and a talented group of freshmen challenging for playing time that Hopper also wants. This is a big spring for Hopper to make a statement and claim snaps in the fall.

Ebo Egundeko will be a red-shirt sophomore this fall, but this is a crucial spring for the defensive end. There are several highly recruited prospects coming in the fall, so this spring Ogundeko needs to make a move. He did not see a lot of action in mop up duty last year and spent part of the year in the doghouse. This spring he needs to take advantage of a huge opportunity.

At defensive end, you could also put Martin Aiken

Martin Aiken
RS Jr. Defensive End
#53 6-2, 255
Smoaks, SC
View Full Profile on alert. He needs to prove he can be counted on before the newcomers arrive.

This past fall, Mackensie Alexander

Spring practice is about a lot of things, but player development is perhaps the most critical. The players mentioned above might have other opportunities this fall, but there should be a sense of urgency this spring. Spring can be about earning trust and earning reps in the fall. This football team will be much deeper if these experienced players take the next step.