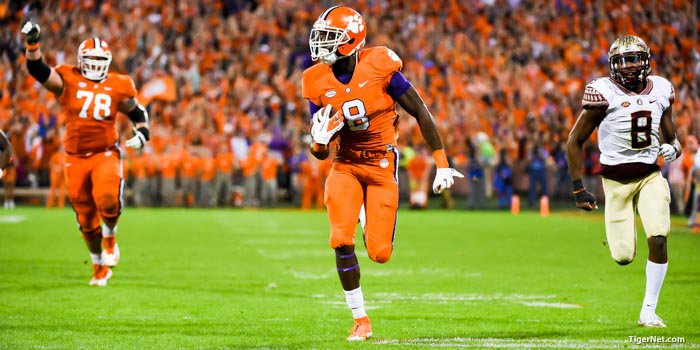 One of my favorite parts of games in Death Valley now is the fourth quarter strength and conditioning video that ends with the words, "This is why we work. Fourth Quarter."

Never has a video been so foreshadowing.

Clemson's Atlantic Division title-clinching win over Florida State, didn't start well. Dalvin Cook's 75-yard explosion sent shock waves through Death Valley. The first half was not beautiful, and it ended on a field goal after a mistake to spike the ball on third down. But like many great meals, the dessert made us forget about all of that.

The Tigers settled down in the second half, and Clemson pulled away in the fourth quarter for a 23-13 thrilling win.

The statistics don't tell the story of how close the game was. Clemson had 29 first downs to FSU's 14. The Tigers were 7-18 on third down and held Florida State to just 2-12. The total yards were 512 to 361. Clemson had 18 more rushing yards and 133 more yards through the air.

But this one came down to the final ten minutes. Both teams seemed to start so many drives deep in their own territory and would drive the ball to midfield before stalling out and punting the other team once again deep in its own territory.

That trend ended in the fourth quarter when the Tigers drove the ball down to the FSU 17-yard line before being forced to kick a 34-yard Greg Huegel field goal. It was his third of the game and his 13th in a row in ACC play.

Perhaps the biggest plays of the game came when Dalvin Cook was stopped on third-and-one and again on fourth-and-one near midfield. Clemson took over, and Wayne Gallman put the game out of reach with a 25-yard touchdown run with 2:34 remaining.

After a final FSU turnover, all that remained were more memories for an electric home crowd. The atmosphere was as good as I have ever seen and fans were treated to the nation's number one team winning at home in that stadium for the first time.

Like many of the epic wins, this one had heroes. Deshaun Watson had over 400 yards of offense. He was 28-of-42 for 297 yards and a touchdown passing and 107 yards on the ground. Gallman added 103 yards rushing and the final touchdown. In the passing game, Jordan Leggett had six catches for 101 yards, and Deon Cain had a 38-yard touchdown. Charone Peake had some big first down conversions with his four receptions for 50 yards. Defensively, Adrian Baker had his first interception of his career.

But this game was won in the trenches. Clemson's defensive line was dominant after the first drive. Christian Wilkins and Shaq Lawson were too much for FSU's offensive line. Ben Boulware and BJ Goodson were dominant against the run after Cook's initial run.

Saturday was a title-clinching game with an amazing atmosphere. Prospects were entertained and recruiting will see the benefits of this one for a long time. The game was the highest rated TV game since 2012. And to think, we all believe Dabo when he says, "The best is yet to come."