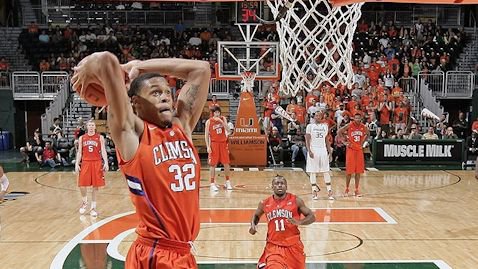 I never mind construction cones on the roads because they make me want to tell myself that things are getting better.

I look at the basketball team at Clemson and will try to remind myself that this season is about construction cones.  It may be difficult at times, because I am sure there will be some disappointing and frustrating times.  However, I like enough about the program and can see a direction that gives me some hope for the future.

Last season I did not have that feeling.  The two seniors drove me crazy and I didn't like the personality of that team.  But after three games, I like this team.

Sunday night Clemson beat the arch rival by 14 points.  It was a game that the Tigers were in control of for most of the game and a big part of that was....wait for it...free throw shooting.

How many times has free throw shooting been the Achilles’ heel for Clemson basketball?  Sunday night the Tigers made 24 of 26 from the charity stripe and broke the school record (.923) for the highest percentage in a game that featured at least 25 attempts.

What was also encouraging about Sunday was the effort.  The Tigers simply played harder than the Gamecocks.  South Carolina head coach Frank Martin admitted that after the loss.  In my opinion this was one thing missing from last season.  How many times did you feel like both seniors left everything on the floor?  Clemson fans can take losing to good teams in basketball, but they have little tolerance for a lack of effort.

This team is likeable from an athletic standpoint, as well.  Sunday night Clemson had 12 blocked shots, including seven from KJ McDaniels.  This team features better athletes also, including Jaron Blossomgame

Youth is not an excuse anymore in college athletics because everyone is young.  On Sunday Clemson played zero seniors, four juniors, four sophomores and three freshmen.  In the old days if you played without a senior you would be considered young.  Sunday Clemson was the most experienced team, as South Carolina played one senior, one junior, four sophomores and six freshmen.

I also like this program right now.   Patrick Rooks

Patrick Rooks
Fr. Guard
#4 6-2, 185
Charlotte, NC
View Full Profile is injured and will miss the season, but by some accounts he is a sharp shooting wing man.  Brownell and his staff really like the two fall signees in Donte Grantham and Gabe DeVoe.  The point is that the staff feels like an upgrade is also coming next season.

I don't want to come across as the sunshine pumper who feels like the entire program is fixed.  There are still issues with this team.  I can see this team struggling in half court sets and facing a zone defense could be an issue on some nights.  And upward mobility in this league is terribly difficult.  However, there are more encouraging signs for this season and beyond.  I can now see Brownell's vision for the program.